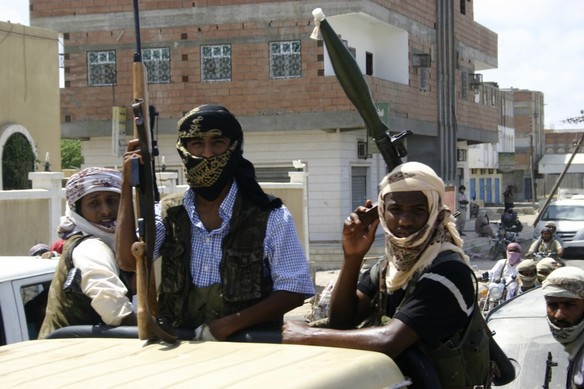 The Ansar al-Sharia Movement In Libya

The Ansar al-Sharia militants of Libya were virtually invisible until a few months prior to the September 2012 attack and burning of the U.S. consulate in Benghazi.

The group seemed to appear out of nowhere on June 7, 2012, when they drove an estimated 200 pickup trucks mounted with artillery into Benghazi’s Tahrir Square, held a rally in which they demanded the imposition of Sharia law in the government forming after the killing of Muammar Gaddafi.

Witnesses say many of the same trucks, showing the emblem of the Ansar al-Sharia organization, was heavily involved in the attack on the consulate and the killing of U.S. ambassador Christopher Stevens. The group has denied involvement, however.

Ansar al-Sharia is a name used by at least two other militant Islamic organizations operating in Yemen and Tunisia. These groups have been far more active in guerilla attacks and both have recently pledged allegiance to the Islamic State of Iraq and the Levant (ISIL).

While it has been involved in forced militant strikes in Libya, the Ansar al-Sharia group there began its existence as a civil organization pledged to sell its concept of a Salafist Islamic religion and a nation under Sharia law in a more peaceful way.

Under the leadership of Sheikh Muhammad al-Zahawi, the group first began to try to gain local support through missionary work that included opening religious schools, medical clinics, security patrols and even garbage collection. The group introduced the Islamic religious police and a sharia court in Benghazi.

Because they first attempted a more peaceful approach to winning their belief system, the organization changed its name to Ansar al-Sharia in Libya (ASL) to separate itself from the other groups by the same name operating in Tunisia and Yemen.

The militant element of the Libyan group quickly emerged, however, possibly with the attack on the U.S. consulate but also with bombing attacks on Sufi shrines all over Libya. While the Sufi are another form of the Islamic faith, the Salafist believers regard the Sufi as idolatrous.

Also there was a strong anti-militia movement that literally drove the Ansar al-Sharia organization out of the city. Some members broke away but a group of about 200 militiamen moved into the Jebel Akhdar area where the organization began rebuilding its membership.

In 2013 the organization opened an office in Derna and later established a presence in Ajdabiya and Sirte, Libya. They were operating under the slogan: “A Step Toward Establishing An Islamic State.”

But Libya is a nation with a large segment of non-Islamic people. On May 16, 2014, General Khalifa Belgasim Haftar launched an air and ground offensive code named Operation Dignity on Ansar al-Sharia and other existing Islamist militia groups.

These groups joined forces as the Shura Council of Benghazi Revolutionaries and launched a counter offensive in what became known as the Second Libyan Civil War. During the battle, group leader al-Zahawi was killed. After this, Ansar al-Sharia seemed to have lost its teeth. The new leader, Abu Tamim al Libi appears to be moving toward an alliance with ISIL, which may be very bad news for North Africa.