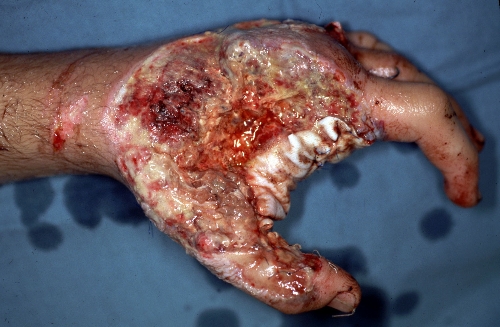 The news accounts are still saying the attacks by the flesh-eating bacteria are rare. But because of the number of incidents popping up this summer the description “rare” probably doesn’t apply any longer.

The bug known as vibrio vulnificus seems to be lying in wait in the toxic oily waters of the Gulf of Mexico. Brian Parrott, 50, became infected June 12 after going in the water at a Galveston beach. Two days after he came down with the sore on his right leg he had the leg amputated to stop the infection from killing him.

A few days later another victim, Adrian Ruiz, 42, went swimming at Port Aransas, Texas. The next day he came down with a fever and red rash on his right leg. He and medical people were still fighting to save his leg as of this writing.

The CDC says this bacterium causes a condition known as Necrotizing fasciitis, which is the quick spreading of the infection throughout the soft tissues of the body. Without a quick diagnosis and treatment with antibiotics, the infection can prove deadly.
Amputation is a “last-ditch” effort to head off the bacteria and keep the victim alive.

Yet another deadly infestation . . . this time an amoeba known as Naegleria fowleir . . . was apparently contracted by an 18-year-old Ohio girl while white rafting with a church group on a North Carolina river in early June. The girl soon developed an infection that literally ate her brain and killed her within days. Authorities investigated and learned that the victim, Lauren Seitz, went briefly into the water when her raft tipped. It appears she absorbed the deadly amoeba though her nose and it went directly into her brain.

The amoeba that killed Lauren is a warm water pest, just like the bacterium that attacked the two men this month in the Gulf. They are usually found in the southern and southwestern states where the weather is hotter than the rest of the nation. As the world continues to warm, however, we may expect an increase in the presence of these deadly infestations.

There are already enough cases of the flesh-eating bacteria that it can no longer be considered a rare event. A total of 27 cases have been reported just in Texas so far this year. Last year there were 102 cases throughout the year.

The CDC reports between 600 and 700 cases diagnosed in the United States. About 30 percent of them result in death.
​
Health officials say that the bacteria usually enter the body through a cut, an abrasion or even an insect bite. It also can attack a victim following surgery. The good news is that healthy people with a strong immune system can usually ward off the infection.