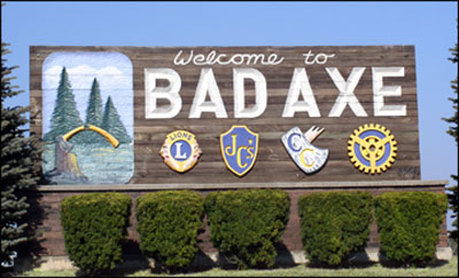 Collapse Of My Homeland

Looking back at it, the world was already in a state of change at the turn of the century and the beginning of the Millennium.

After our adventures in Arizona my wife and I returned to Huron County, the place of my youth. There I worked briefly as a county and city government reporter for a weekly newspaper in Bad Axe, Michigan, before going into full retirement. Thomas Wolfe was right when he wrote that famous line: “you can’t go home again.” Indeed, nothing was like it was when we left.

Even the farm where I grew up was changed. The house still looked about the same, but the trees in the yard were larger and some of the out buildings were missing. The fields weren’t being farmed any longer. In their place could be seen the construction of new homes. A house stood on what had once been the old gravel pit at far west end of the farm. The trail where we once drove to the back of the farm to pick mushrooms and blackberries was now someone’s private driveway.

The politics of Huron County was centered around mostly environmental issues.

State inspections uncovered high levels of arsenic in the ground water throughout the area and just about every city and town was under orders to either build expensive water treatment facilities or find a way to draw water from Lake Huron. Consequently, a master plan was being worked out to build a big water treatment plant at Port Austin that would serve that community and everything south to Bad Axe.

There was a lot of state and federal money getting promised for what was becoming a multi-million dollar project, but all of the local water users were facing a hike in water rates to cover the local share. Naturally it was a hot-button issue. The village of Ubly, located south of Bad Axe, opted not to be included in the project. That town was either considering a water line to the lake from the east, or building a treatment plant.

The task of getting all of the communities and townships along the route to agree to participate, and accept their fair share of the cost of building the plant, the distribution system and then running and maintaining everything was an extremely complicated thing to get worked out. I attended a lot of meetings of the various boards, committees and sub-committees comprised of representatives from all of the participating governments and watched it all get slowly hammered out. Before it happened, however, there were many charges, counter charges and irate shouting matches.

In addition to this, Bad Axe was notified by the state that its sewer treatment plant was out of date and that a new facility had to be built. This was another costly construction project that promised to raise sewer rates for the citizens of Bad Axe and surrounding area that were tapped into the city sewer system.

It was obvious that it was going to soon be really expensive to continue living in these Huron County communities. Citizens were angry. It was a heated controversial issue.

The farmlands throughout Huron County were being bought up by corporations and factory farms were appearing everywhere. We suddenly had giant barns and pens housing thousands of dairy and beef cattle, pigs and chickens. This was causing an unexpected drain on the underground water reservoirs, creating volumes of polluted run-off from livestock urine and feces that was getting into storm drains and consequently into local streams and then into Lake Huron, creating a stench that permeated the air throughout the county, and put pressure on the Road Commission to build and maintain roads capable of supporting the weight of heavy trucks that serviced such farms. The township boards were tearing their hair. The Road Commissioners were tearing their hair. Appeals to state legislators for controls and help went unanswered.

Testing of Lake Huron waters at the various state and county parks surrounding the county showed so much contamination swimming was banned for much of the summer. We worried about eating the fish being caught in the lake as well.

Because of the rising cost of crude oil, the price of laying asphalt and maintaining the county road system was getting so costly that less and less road construction work was getting done each year. Asphalt is made from crude oil. Consequently the roads were beginning to fall into poor repair by the time we left the area.

During an interview with one of the state legislators seeking re-election to office, this man boasted to me that among his accomplishments was the sponsorship of a bill allowing big seed companies like Monsanto to place secret test patches of genetically modified corn, soy, wheat and other crops throughout the area, and prohibit local growers to protest. Because of the way these crops cross-pollinate and because of the way Monsanto uses this trick to trap farmers into paying big fines, I recognized this as a bill designed to benefit big corporations. I broke the rules that day and scolded the politician about what he had done. He got up and stormed out of the interview.

Of course I made sure our readers knew what this man had done. I am not sure that they understood the ramifications of the deed at the time. We were living in a predominately Republican area.

I last saw my old friend Jim Fuhrman during those days in Bad Axe. He had lost the family farm on Filion Road, near where we both grew up. He and his wife, Sharon, went bankrupt and were forced to sell out to one of those corporate farming interests. Jim was a broken man when I last saw him. He had suffered a severe automobile wreck, lived in constant pain, and was trying to make a living selling some kind of health drink. He died not long after we left the area.

The day Doris and I moved from Bad Axe, we both knew that we were never going to return.