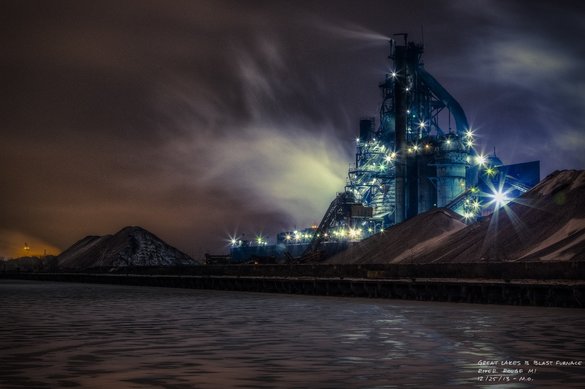 Zug Island is a man-made cay in the Detroit River, located just off the City of River Rouge, Michigan. The island has been the site of a large industrial complex that some say is owned by USS Steel, so people living along the river in Michigan and Ontario have always thought it is some kind of smoldering facility where steel or other kinds of metal are manufactured.

Nobody knows for sure about Zug Island because it is surrounded by a moat and a high fence. And the facility is heavily guarded so nobody except the mysterious gang of people who work there is ever allowed entrance.

For years people knew Zug Island existed. In fact it is listed as part of the City of River Rouge. But there appears that there was never much concern about whatever went on behind those walls. That is until sometime in 2011 when a strange humming noise began bothering people in Windsor, Ontario, on the Canadian side of the river.

It was first reported by a few people who began complaining about an “irritating low frequency grinding rumble.” Some said it sounded like an idling truck engine. Not everybody was hearing it. Since the noise seemed to first be noticed on the Canadian side of the river it became known as the “Windsor Hum.”

There was debate at first about whether the hum was real. Finally one news reporter collaborated with a homeowner one evening. They turned off every working device in the house and placed a glass of water on the floor. When the hum began being heard the water in the glass began shaking and vibrating.

As time went on the noise got louder and louder and the shaking increased until residents on both sides of the river were complaining. They said it was rattling dishes and shaking the windows in their homes. Newspapers were called. The city authorities received complaints. The Canadian Ministry of the Environment was asked to investigate.

One story noted that the hum most often occurred “in the dead of night: a deep, relentless rumble that rolls in from the west. At the best of times, it’s a low frequency drone – not unlike the sound of idling truck engines . . . At its worse . . . an incessant roar. It rattles windows, frightens dogs, wakes up babies, doles out headaches and deprives people of sleep.”

Al Maghnieh, a commissioner on the Windsor City Council, said he was disappointed by the study. “We all know the hum is real,” he said. “We don’t need a $60,000 report to tell us that. What we wanted to know is what the Hum is and what we can do to stop it. We wanted to know about potential health effects or damage to property from the vibrations.”

Anyone reading this story would think it odd that all those local, state and federal investigators might have saved a lot of time and money by simply contacting U.S. Steel and asking what the hell they are doing on Zug Island. It seems that this simple solution has been attempted without success. Maghnieh said he thought political interference was involved.

He said the people on Zug Island don’t answer the telephone and don’t answer letters. It almost suggests some kind of secret military operation is going on there, and the public is not invited to find out about it.
​
In the meantime, that nightly rumbling noise is driving the people living along the river to distraction. They just want it stopped.