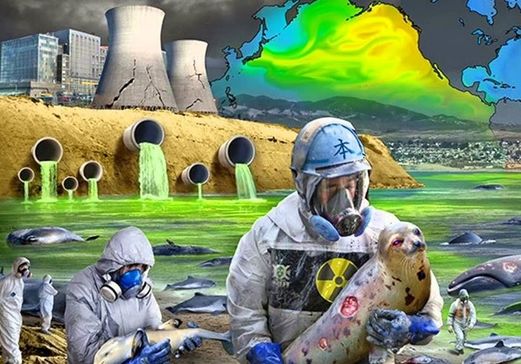 The lack of disaster news and the reports that farmers around the wrecked Fukushima nuclear power plants in Japan were recently given permission to return to their land may have given the impression that the crisis at the three melted-down power plants is easing. But don’t let the stories fool you.

New reports this week suggest that the Fukushima disaster is not over. If anything it is intensifying, plant number two just went into total melt-down, and a leaking water tank is spilling water so toxic that it will kill any living thing that comes near it.

And that water continues to stream daily into the vast Pacific Ocean.

Officials at Tokyo Electric Power Co. (TEPCO) have just revealed that radiation levels inside the reactor are higher than when the plant went into a triple meltdown six years ago.

This is suggesting that something very serious is occurring within a structure that is so radioactive that even robots are unable to successfully enter without going into a complete shutdown. Consequently, plant officials are unable to find out what is going on inside the wrecked facility.

What is feared is that the reactor has become so hot that it has burned its way through the containment core and is falling into the rock formations and possibly the ocean waters under the plant. It is somewhat comparable to a runaway atomic bomb that no human manufactured device has ever been designed to bring under control.

TEPCO’s operator recently reported readings as high as 530 sieverts an hour inside the containment vessel at reactor No. 2. This reading, described among “experts” quoted by Japanese media as “unimaginable,” is extremely more than the old record of 73 sieverts an hour at that same facility.

To give some idea of the severity of the radioactive energy being emitted from that ruined energy plant it is notd that a single sievert is enough radiation to make a person very sick and nauseated. Five sieverts is enough to kill a person within about a month. A single exposure to 10 sieverts will kill within weeks.

The terrible news leaking from Fukushima researchers is that a meter-wide hole has been discovered under the reactor’s pressure vessel that was the plant’s back-up cooling system. This was obviously created by hot melted nuclear fuel that is beginning to penetrate that system and find its way into the ground water.

Some people worry that the core has literally burned its way through the containment vessel. TEPCO officials are not admitting this has happened but at least one person admitted that they don’t really know where the core is. That radiation levels are rising to such an extreme suggests that the worst fears are happening, and no one has any idea how to stop a pending disaster of unimaginable proportions from occurring not only in Northern Japan but throughout much if not all of the Norther Hemisphere of the planet.

TEPCO has just developed a new self-propelled robot that it hopes can operate long enough to get inside the ruins and give company officials some images of what is going on there. Several earlier robots were tried but all failed within minutes of exposure to the extreme heat and radiation occurring there.

The latest astronomical readings were measured by a robot that lasted just long enough to capture the first clear images of the containment vessel inside reactor No. 2, one report said.

The row of nuclear power plants were destroyed after Northern Japan was hit by a major earthquake followed by a tsunami in 2011 that caused a power blackout. That blackout disabled the plant’s ability to cool its own reactors so they went into melt-down.

Radioactive debris from the Fukushima disaster has been killing sea life throughout the Pacific Ocean, and toxic radioactivity has been detected in the air and consequently in crops throughout North America and even Europe. What is happening in Northern Japan is about to impact us all in unspeakable ways.