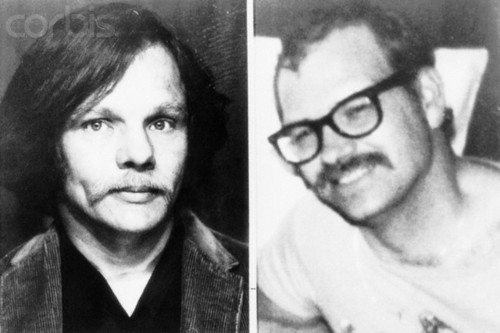 It was in 1979 that teen-age girls began disappearing from the streets of Los Angeles and their raped and tortured bodies were found along a secluded fire trail in the San Gabriel Mountains. The serial killing spree claimed five young women before Lawrence Bittaker and Roy Norris, dubbed “The Tool Box Killers, were caught and eventually convicted of the crimes.

Bittaker and Norris, who both had long felony records, reportedly met while serving terms at the same time in California Men’s Colony, a lock-up for men located near San Luis Obispo in Southern California. They discovered they both shared a secret interest in raping and torturing women. They made an elaborate plan to meet up and murder one girl of each teenage year from 13 through 19, after they were released.

The following information from police records was taken from Norris’s testimony at the time of his arrest.

Even after they met up following their release from prison, the two men continued making their elaborate plan. The purchased a used GMC cargo van that had no windows on the sides and a large passenger-side sliding door. They nicknamed the van their “Murder Mac.”

From February to June, 1979, Bittaker and Norris made “practice runs,” picking up more than 20 female hitchhikers. These girls may not have been assaulted. The two men were using the incidents to develop various ruses to lure girls into the van. During this time they also were searching for places to perform their evil deeds and dispose of the bodies.

Their choice was a secluded fire road in the San Gabriel Mountains. There was a lock on a gate leading to this road. They broke this lock with a crowbar and replaced it with their own lock so they had access. They also installed a bed in the rear of the van.

Once they were satisfied that they were prepared, the killings began. The two men picked up and murdered their first victim, Lucinda Lynn Schaefer, 16, on June 24. The girl had attended a gathering at a church in Redondo Beach and was walking home on a side street that evening. When she refused to accept a “ride home” the men forced Schaefer into the van and bound her while the radio turned up to cover her screams. The two drove Schaefer to the mountain fire road where they took turns raping her before strangling her with a wire coat hanger and vice-grip pliers.

Two weeks later the killers became more brazen with their second victim. Andrea Joy Hall, 18, was forced into their van after the men found her hitchhiking along Pacific Coast Highway. They drove her into the mountains and both men raped her repeatedly, forcing her to beg for her life. In the end they thrust an ice pick through both ears and into her brain, then strangled her before throwing her body over a cliff.

The third and fourth victims died together after accepting a ride on September 3. Jackie Doris Gilliam, 15, and Jacqueline Leah Lamp, 13, also were hitchhiking along Pacific Coast Highway near Hermosa Beach when Bittaker and Norris came upon them. Once in the van the girls were overpowered, bound and gagged, and taken to the mountain killing area.

The girls endured nearly two days of captivity, being sexually and physically tortured. Gilliam was stabbed in her ears with an ice pick then strangled. Lamp was bludgeoned to death with a sledgehammer. Their bodies were thrown over a cliff.

The fifth and last killing was perhaps the most brutal of them all. The victim was 16-year-old Shirley Lynette Ledford, who accepted a ride while on her way home from a Halloween party in a rural Los Angeles suburb. This time the men didn’t bother driving up into the mountains, but tortured and raped Ledford in the back of the van while taking turns driving around. They taped the entire event in which they beat Ledford with hammers and other tools, and raped and sodomized her over and over again. After two hours of repeated torture, Norris strangled her with a wire coat hanger and pliers. Her body was tossed out onto the front lawn of a private home.

The killings came to an abrupt end in November, 1979, after Norris bragged about his deeds to a former inmate he knew at the Men’s Colony. This man was shocked by the story and notified authorities. At the time Ledford’s body was the only one that had been found by the police.

Police began an immediate investigation. In Bittaker’s apartment they found several Polaroid photographs of Andrea Joy Hall and Jackie Gilliam, both of whom were reported missing. In the van they found tools, jewelry, and a tape recording of a girl screaming and pleading for mercy.

During questioning, Norris broke down and confessed to the killings. Police said in their search of the men’s living quarters, they found evidence of at least one other rape-murder; even found her nude picture, but never identified her. When the news got out yet another victim came forward. She had reported the crime at he time but could not identify her abductors. After Bittaker and Norris were arrested, she said she was sure they were the men who raped her but then let her go.

Bittaker was sentenced to death on multiple charges of rape, murder and kidnapping. Due to numerous appeals that have gone all the way to the Supreme Court, Bittaker remains locked up on death row at San Quentin State Prison as of this writing on June, 2015.