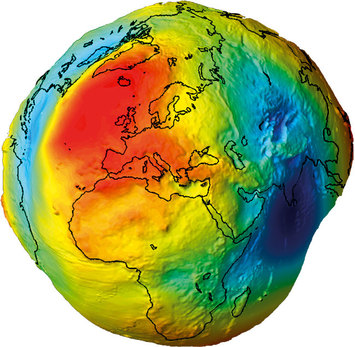 Ancients Knew The Earth Is Not Round

There is a wobble in the way the Earth moves and there is probably a good reason for this. Our planet, in spite of all the images we have seen of it from space, is not a perfectly round ball of solid rock.

If we could drain away all of the water the shape of Earth would shock us. It has a massive gouge removed from one side, directly under the Pacific Ocean.

The Earth’s crust ranges from 12 to 45 miles in thickness. But under the Pacific Ocean the crust is only about three miles in thickness. The crust has been scooped out by up to seven miles at some points. While Mount Everest stands a massive 29,035 feet above sea level, the average elevation of all the continents on the side facing away from the vast Pacific is 2,300 feet. The average depth of the oceans is 12,500 feet. At one point in southern part the Pacific’s Mariana Trench, however, the ocean is 36,200 feet deep.

The very shape of the Earth is one of the reasons scientists believe the Sumerian story about an early collision of planets that helped create the Moon is probably true. At some point, perhaps a few millions years ago, after the great celestial battle caused the formation of our solar system as we know it today was concluded, waters flooded the great cavity on the torn-off side of Earth. Dry land appeared on the other side.

The fact that our planet offered both dry land and great oceans of water, and our proximity to the Sun gave us the perfect environment, Earth became a candidate to support life. And over the millions of years that followed, life appeared.

Earth did not look exactly like it does today when land first emerged the Sumerian tablets say. Modern science corroborates this ancient knowledge. They wrote that the first land was a single continent that was known as Pangaea.

The clay tablets speak of the way the giant crust of Earth began cracking and moving, causing portions of Pangaea to separate. Contemporary researchers speak of this as “plate tectonics.” The movements of the plates are still occurring today. This is the cause of constant earthquakes that happen all over the world and especially on the “rim” circling the Pacific Ocean.

The plate movements slowly separated the North and South American continents from Europe and Africa, opening a second water-filled gap that became the Atlantic Ocean. Africa broke away toward the south eventually creating the Mediterranean Ocean. There was a separation between the Middle East and Asia that created the Black and Caspian Seas, and even more separations to the south of Asia created Australia, Indonesia, Papua New Guinea and the Philippines.

The Sumerian people, believed to be one of the first great human civilizations to appear on Earth, knew and understood all these things and more. Yet archaeological digs in that area produce no evidence of an advanced people in possession of the tools and sensitive kinds of instruments necessary for them to have obtained such knowledge. Consequently there is evidence here to support the theory of alien visitation.

The Sumerians were given this information either from space visitations or it was handed down from earlier advanced civilizations that predated their existence.
​
For instance the Sumerians literally mapped the world, showing details of the land mass of Antarctica when it was free of its ice cover. Modern expeditions to that part of the world did not know a land mass even existed there until an icecap slid into the South Sea and exposed land in 1820.

The Sumerian maps also show ancient rivers in the Middle East that no longer exist today.
​
The only explanation for this is that all of these things were observed and recorded by entities that flew over the world centuries before even the Sumerians were around.