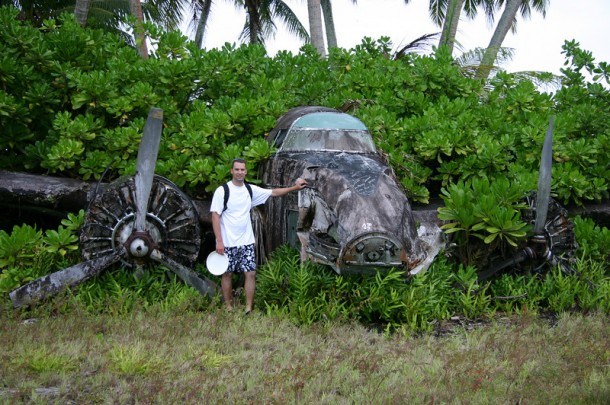 The Strange Island Of Palmyra

In this overpopulated and troubled world we live in, there is a popular dream of escaping to a tropical paradise island where we can live in quiet bliss, supping the juice of cocoa nuts, catching our daily meals in the water and just getting away from it all.

A few people have actually tried this. And if they ended up on Palmyra Atoll in the heart of the South Pacific they quickly discovered that tropical island wasn’t where they wanted to be. The place is reportedly haunted or cursed.

Norman Sanders, who conducted geological surveys on the island, wrote in his log: "Palmyra will always belong to itself, never to man. It is a very forbidding place."

Indeed, the island came into international focus in 1974 because of the double murder of Mac and Muff Graham who took their sailboat, the Sea Wind there on an adventure, and never returned. Their boat was later found and Buck Walker, a fugitive who was hiding out on the island with his girlfriend, Stephanie Stearns, was eventually sentenced to life in prison for the murders of the Grahams. It was believed the Grahams were killed for the theft of their boat and the provisions stored in it. The case was recounted in detail by authors Vincent Bugliosi and Bruce Henderson in their book, And the Sea Will Tell.

The island was used by the U.S. Military during World War II as a refueling station for long range air patrols and submarines. The Navy personnel stationed there said they experienced a sense of inexplicable dread. There were various violent episodes, fights and even murders among the men. Other sailors experienced panic attacks and there were suicides.

Because of the naval intervention, the islands became infested with a rat population. When the U.S. Fish and Wildlife Service, the Nature Conservancy and Island Conservation conducted an extensive eradication of the rats, an estimated 30,000 rats were disposed of.

The island chain has since become an incorporated territory of the United States. It has no government jurisdiction since there are no permanent residents. Government researchers spend time there, however, so in 2004 several small bungalows and showers were erected. Also there is a common cooking and dining facility and dock on Cooper Island, the largest in the atoll.

Palmyra is located in about the center of the Pacific, about 1,000 miles due southwest of the Hawaiian Islands and not far north of the Equator. It is hot and rainy there most of the time. The southern and northern currents meet at this spot so the beaches are littered with trash from throughout the world. Most of the fish in the waters are poisonous.

These are some natural reasons why Palmyra is not a true island paradise. But there also appears to be some kind of spiritual curse that makes even the temporary dwellers feel uncomfortable.

Perhaps it goes back to the many shipwrecks that have occurred there.

The pirate ship Esperanza, laden with gold and silver plundered from the Peruvian temples, wrecked on the island reef. The crew managed to salvage some of the treasure before the ship sank. They reportedly buried the treasure then built rafts and set off to sea. There was allegedly one survivor, who was picked up by a whaling ship. Adventurers have been searching for the treasure ever since but nothing has ever been found.

A whaling ship was reported wrecked on Palmyra in 1855. No wreckage was found and the name of the vessel was never recorded.

The Angel, an American ship, wrecked on the Palmyra reefs in 1870. The crew made it to shore but none survived. The bodies were found by another ship’s crew that stopped at the island sometime later. All had been murdered.

In 1987 a Coast Guard aircraft spotted a sailboat standing demasted just off the coast of Palmyra. When boarded the Coast Guard found the skeletal remains of Manning Edward. He had been on a three-year voyage across the Pacific and was sailing alone. It was not determined what happened to him.

The Sea Dreamer, a private vessel sailed by the Graham Hughes family and their crew, all from San Diego, ducked from a storm into Palmyra Island. After the storm the vessel left for Hawaii but was never heard from again.

During the war, former naval officer Hal Horton recalled the following strange events: "One of our patrol planes went down near the island. We searched and searched but didn’t find so much as a bolt or piece of metal. It was weird. Like they’d dropped off the edge of the earth. Another time a plane took off from the runway, climbed to a couple hundred feet and turned in the wrong direction. They were supposed to go north and they went south instead. There were two men aboard that plane. We never saw them again."

The island was discovered by Captain Edmond Fanning aboard the ship Betsy, which was on route from America to Asia in 1798. Fanning logged that he felt a strange sense of anxiety and thought of it as a premonition of danger. Consequently, he ordered his helmsman to heave to for the rest of the night. The next morning as the ship began its course, a lookout spotted a dangerous reef dead ahead. It was the northern edge of a coral reef that surrounds what was then an uncharted island.

The island was named for the American ship Palmyra which sheltered from a gale there on November 7, 1802. In 1859 Dr. Gerrit P. Judd landed on the brig Josephine and attempted to lay claim for the American Guano Co. Then in 1862 Captain Zenas Bent landed and took formal possession for the Hawaiian government. He left five men on the island to stake that claim.

The island was annexed to Great Britain in 1889. That same year Palmyra was named among the Hawaiian Islands by an Act of the U.S. Congress. Both nations apparently laid claim to the island until 1912, when Rear Admiral W.H.H. Southerland brought the U.S. Cruiser West Virginia to the island and took formal possession in the name of the United States. It has remained a U.S. territory ever since.

Why they all fought over possessing that atoll remains a mystery. Other than a landing strip and fuel dump used during the war and a hiding place for ships caught in storms, it has been of no practical value.