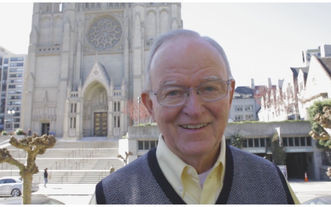 It was in 1993 that Episcopal Bishop William Swing of Grace Cathedral in San Francisco began meeting with religious and spiritual leaders to organize what has become the United Religious Initiate, an organization fostering world communication and cooperation.

Now retired, but when still active Bishop Swing wasn’t fooling around on this. He met with the Pope, the Dali Lama, Mother Teresa, the Sheik of El-Ashar, the Archbishop of Canterbury, the Ecumenical Patriarch of Istanbul and even included the Gorbachev Foundation in his dialogue. Even Gnostic and Wicca representatives were included, as were Shintoists, Baha’is, Sikhs, Noroastrians and New Age followers. He left no stone unturned.

Swing’s United Religious Initiative, which now is chartered as a legitimate organization with its headquarters in San Francisco, seeks to be patterned after the United Nations. The difference is that it serves world religions instead of governments. Its voiced goal is world peace, justice and a healing of the Earth.

In June 2000, delegates representing 64 different religions from 65 countries gathered in Pittsburg, Pa., to sign the URI charter. This brought the organization into existence, with hundreds of grass roots groups around the world. And what is interesting is that they connect through the Internet.

The idea is extremely radical, especially among fundamental extremists in Christian, Jewish, Moslem and various other sects who perceive themselves to be following the only true god and see all others as lost souls in a world of chaos and damnation.

It is because of these religious extremists that the world is suffering from terrorism, war and other deeds of horror that include anti-abortion laws, witch burning, assassinations and social acts of extreme prejudice. We have often proposed shutting down all formal religions as a first step toward a peaceful unification of nations.

Bishop Swing may have thought of a much better and certainly a workable way of achieving the same goal. By building a religious bridge within the URI, he has created a “kind of parliament of religions” where religious and spiritual communities can assemble for prayerful dialogue and cooperative action “to make peace among religions and to be a force for peace among nations.”

While the fundamental Christians surely see the URI as a movement toward the dreaded and prophetic “one world church” predicted in the Book of Revelation that signals the end of times as we know them, any effort at opening peaceful dialogue between world religious factions at this critical moment in human history appears to be a logical and intelligent step to be taking.

Throughout history, when armies have gone to war they have always believed God was on their side. Yet when you examine the death and extreme suffering resulting from warfare, we must wonder if a loving God would condone war whatsoever.

We believe the Hebrew writers of the Old Testament books were in error when they described a god of vengeance that sent their armies into battle against other tribes co-existing throughout the Fertile Crescent, or the area we now know as the Middle East. Indeed, we are today discovering that the true god exists within each and every human. The call to war came from within the stone hearted tribal leaders of that time and never from an external “god of vengeance” looking down from the sky.

Racial, religious and ethnic hatred exists all over the world and nearly all of it is centered on religious belief systems that preach intolerance for others. The Catholics have fought and hated the Protestants in Ireland for years. The Hindus of India and Moslems of Pakistan have been in conflict. The Christians and Moslems have been at war since the days of the Crusades.

Bishop Swing once noted that the world is moving toward “unity in terms of global economy, global media, global economy and global ecological system. What is missing is a global soul.”