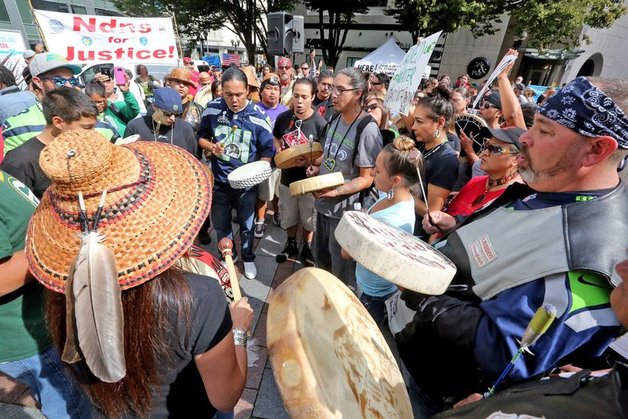 Documentary news reporters and camera crews recording the ongoing community protests at oil pipeline construction sites in North Dakota and other areas are in court this month fighting charges of criminal trespassing and felony conspiracy.

Their defense is that their First Amendment rights have been challenged. The amendment, ratified in 1791, states that: Congress shall make no law respecting an establishment of religion, or prohibiting the free exercise thereof; or abridging the freedom of speech, or of the press; or the right of the people peaceably to assemble, and to petition the Government for a redress of grievances.

The reporters and actors now standing up against the oil companies, the U.S. government and federal law enforcement agencies include such well-known names as Deia Schlosberg, Amy Goodman and Shailene Woodley.

Goodman, the award-winning host of Democracy Now, is back in North Dakota this week to face felony charges filed against her after she prepared news coverage of the ongoing Lakota/Sioux protests against the Dakota Access Pipeline.

Schlosberg and other film makers were arrested and jailed for 48 hours in Walhalla, North Dakota last week for filming a climate change protest. She was prevented from talking to a lawyer and authorities confiscated the footage. If the felony charges against her stick she could face a possible prison sentence of up to 45 years.

Actor Shailene Woodley also was arrested and jailed while participating in the Dakota construction site. Police said she was charged because she was well known and that as many as 40,000 people watched her live coverage on Facebook. Other members of her film crew also were arrested.

In addition to the arrests of the journalists, security officers turned on the protesters with dogs causing the demonstration to turn violent on Saturday. Video has been released showing dogs with bloodied muzzles and a guard holding what looks like a pepper spray canister. The officers were all employees of Energy Transfer Partners, the Dallas company that is involved in building the pipeline.

Hundreds of representatives from tribes all over the nation have joined activists to camp near the pipeline construction site. The protest began in July after the Army Corps of Engineers approved running the oil pipeline under the Missouri River, close to the Standing Rock Sioux Tribe's reservation.

The protesters are taking a stand against the burning of more fossil fuels because of concerns about global warming. The tribe is worried about leaks in the pipeline that could potentially destroy the reservation's drinking water. Thus there is a catalyst on the site for serious conflict as the winter season bears down on North Dakota.

The issue has become so heated that activists in four states succeeded last week in shutting down all of the pipelines carrying tar sands oil from Alberta, Canada, into the United States.

At issue in the courts is a violation of First Amendment rights for reporters who came to North Dakota to report the protest.

What is troublesome is that Washington lawmakers and even President Barack Obama appear more interested in protecting the interests of the oil companies than they are about bringing a shift from carbon fuels to green energy.
​
In a briefing last week, White House Press Secretary Josh Earnest warned: "I can tell you that both the Department of Homeland Security and the Department of Transportation are investigating these reports and trying to get the the bottom of what exactly happened, and what potential steps could be taken to ensure the safety and security of our energy infrastructure."