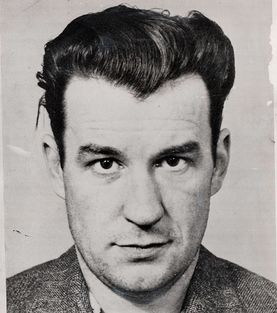 Before he was caught and convicted, Peter Manuel managed to terrorize the people of Lanarkshire, Scotland, in the mid-1950’s. He was found guilty of seven murders after his capture in January, 1958, but authorities believed he was guilty of at least two other unsolved killings. After he was caught Manuel claimed 18 murders.

While the hunt for the mystery serial killer was going on, between 1956 and the day he was caught, the media nicknamed Manuel “the Beast of Birkenshaw.” Many of the murders were committed in and around Birkenshaw, a village in North Lanarkshire and Glasgow, where Manuel was living at the time he was captured.

Manuel was born in 1927 to Scottish parents in the United States but the family moved to Birkenshaw while he was a child. By the time he was 16 Manuel was serving nine years in prison after conviction for a string of sexual assaults. He was in and out of jail constantly after this on charges of assault and robbery, and he was a suspect in various murders although police failed to prove his guilt.

It was in January, 1958 that police linked Manuel to the shooting deaths of the Smart family in Uddingston, a community near Birkenshaw. Peter Smart, his wife, Doris and their 10-year-old son were all found dead in their beds. Manuel was captured after new banknotes stolen from the Smart home aroused the suspicion of a local bartender.

After his arrest Manuel not only confessed to killing the Smart family, but also the murders of Marion Watt, her daughter Vivienne and sister Margaret Brown in their home in High Burnside. They were all shot.

Manuel also admitted raping and killing seventeen-year-old Isabelle Cooke while she was walking from her home to a dance in Uddingston, and Anne Knielands,17, whose body was found on a nearby golf course in 1956. The Cooke girl was strangled. Knielands’ skull was bashed by a piece of iron.

Before he was put to death by hanging at Barlinnie Prison Manuel allegedly confessed to 18 murders, including that of a local taxi driver. Police believe the death count was actually about 15 and they have only been able to prove seven.
​
The papers involving the case were strangely ordered sealed for 75 years so further details concerning Manuel’s case remain closed.