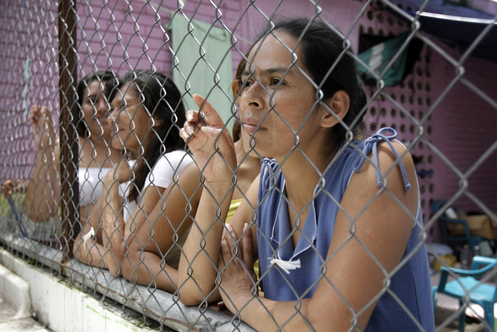 Abortion as we understand it in the United States involves the voluntary removal of an unborn fetus from its mother’s womb. Because of Christian-driven dogmas this has been a controversial issue even when the fetus is shown to be abnormal, is the result of a rape, or it threatens the health and life of the mother.

But consider the abortion laws in Catholic Al Salvador, where women have been sent to prison after suffering miscarriages.

A miscarriage, just to make sure readers clearly understand, is identified in the dictionary as an expulsion of a fetus before it is developed. One description is a “spontaneous abortion,” usually a natural rejection of a defective fetus. It is rarely, if ever, blamed on the mother.

Knowing this, it seems incredible to believe that the government and drafters of law in Al Salvador would put a law on the books that makes it a crime for a woman to suffer a miscarriage. It is bad enough when women are forced to carry children from rapes to term, or to have the burden of caring for mentally or physically challenged children when medical testing exists that warns of such problems early in the pregnancy.

The battle lines are still being fought over in the United States. In Al Salvador, where the extreme Catholic Opus Dei cult prevails, it is somewhat surprising that efforts have been made by legislators to remove some of the sting from existing abortion laws. But there is enough twisted language on the books for vindictive prosecutors to convict impoverished women to prison terms if they cannot afford to fight back.

Even though Pope Francis has gone so far as to grant priests the power to pardon women who have abortions, followers of the Opus Dei cult are brainwashed to think that all life is sacred, even if it is forced upon a woman or a deformed and imperfect child would result in carrying the baby to term.

It may seem hard to believe that a woman can be charged with murder because of a miscarriage, but in Al Salvador, because of the Catholic indoctrination, people lack sympathy for pregnant women who lose their babies. They tend to believe the mother purposely did something that caused the miscarriage.

At last count there were 15 cases of women locked behind bars on miscarriage charges. Six are awaiting sentencing. The usual sentence is 40 years in prison because losing a baby is considered murder.

Any family that has suffered the tragedy of miscarriage will recognize the insanity of this kind of legal thinking.

The abortion laws in Al Salvator were more relaxed before 1998. The laws were amended, however because of pressure from the Archbishop of San Salvador and the Say Yes to Life Foundation. When the Nationalist Republican Alliance submitted an amended bill withdrawing all grounds for allowing abortions, the Legislative Assembly passed it 61-23.
Al Salvador also amended its Constitution in 1999 to recognize human life from the moment of conception. Consequently a miscarriage, even after the first weeks of pregnancy, can be considered a crime of murder.

This story was prepared last week when the Al Salvator story was making international headlines. We are happy to report that the courts agreed to release Carmen Guadalupe Vasquez, who served seven years of a 30-year sentence, after a women's group known as "A Flower for the 17" staged months of public protest. The Supreme Court reviewed the Vasquez case and found "reasonable doubt" in her guilt.

A report in the Daily Mail said there was an indication that the government may be reconsidering the strict law and that other women serving prison time for the same "offense" may also be released.
​
Nearly 130 women have been sent to prison in Al Salvator because of this cruel miscarriage law, the story said.