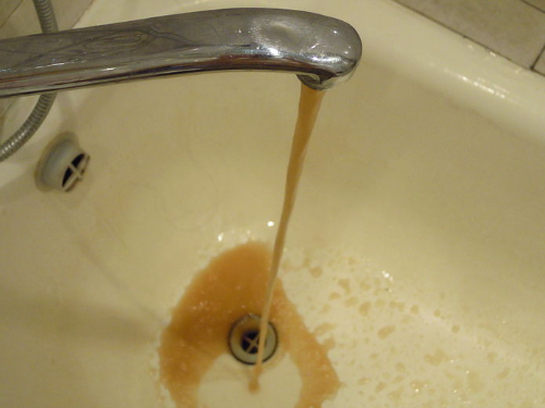 The revelation that citizens of Flint Michigan were being poisoned by toxic drinking water has turned out to be an epiphany to the rest of the nation. It is turning out that few U.S. city water systems are equipped to handle the deluge of new and deadly toxins now leaching into the world water supplies.

While Flint water was found to be tainted with corrosive industrial waste from the Flint River, the biggest problem was lead that was leaching from the old water lines throughout the city and in the older homes.

The Flint water issue which came to light in early 2014 has since caused health officials all over the nation to examine other city water systems. And what they have been finding is a shocking revelation that lead water pipes everywhere are defiling the water flowing from our taps.

While the older water purification systems are still doing the jobs they were designed to do, they were never created to filter some of the new industrial, agricultural, medical and radiation created toxins now making their way into our streams, lakes and fresh water aquifers.

Just the occurrence of lead alone has since been discovered in Grand Rapids, Jackson, Detroit, Saginaw, Muskegon, Holland and several other Michigan cities. Not only have these city water systems been found as toxic as the water in Flint, but some areas are even worse, according to the Detroit News.

The Detroit report looked over the border into Ohio and found the problem is just as serious in that state as well. This suggests the lead poisoning problem alone may be something affecting the health of people . . . and especially the children . . . all over the country. The lead is leaching from old lead pipes. Homes with newer copper or plastic plumbing appear to be in better condition, except for the toxins known to leach from plastic.

And people who rush to the store to buy their drinking water in plastic containers may not be faring much better. If the water they purchase is not distilled, chances are it is coming out through water systems that are no better than those being used throughout Michigan and other states. And since they are in plastic containers, some say there is a plastic toxin to worry about. There is debate over whether plastic bottles are leaching dioxins and Bisphenol A, both considered carcinogens.

Tests conducted in some of the nation’s big cities have revealed the following startling chemicals flowing from the public taps:

--In Jacksonville, Florida, 23 different toxic chemicals were found. They included a variety of trihalomethanes used in cleaning products. The chemicals included chloroform.

--In San Diego testing found 20 contaminants that also trihalomethanes plus manganese, a byproduct of industrial manufacturing. These same chemicals plus nitrates from fertilizer, nitrite used in curing meat and the herbicide atrazine in the water at Omaha, Nebraska.

--At Houston testing turned up 46 different toxins that included haloacetic acids from disinfectants and alpha particles, a form of radiation.

--Cleaning chemicals, herbicides, pesticides and arsenic turned up in the water at Reno, Nevada. And in Las Vegas a variety of radium isotopes from uranium deposits were found. Uranium and other radium isotopes also have been found at Riverside, California and wells all over the Navaho Reservation in Arizona and Pensacola, Fla. The isotopes are coming from closed uranium mines in the west and probably from leaking nuclear power plants.

--When we were working for a string of newspapers in the Thumb Area of Michigan about 10 years ago a major story in that area was the discovery of arsenic in the water systems.

It appears safe to say that the availability of safe fresh drinking water is now a seriously threatened commodity. The reckless destruction of this important resource through new industrial practices like fracking and the discharge of chemical sludge in lakes, rivers and streams is making the situation worse with each passing day.

It is true that industrial methods of desalinating sea water and making it available for human consumption have been developed. That process was being used on U.S. Navy ships that called at the Fukushima disaster in 2010. What it did not do was remove the radioactive isotopes in the water. Hundreds of sailors drank this water and are now dying because of it.

The Fukushima radiation and crude oil contamination from various oil spills around the world have polluted the oceans to a point where desalination may not be the answer for the next few thousand years.
​
This planet contains only the amount of water that was here at the time of creation. Every drop we use is recycled and returned to the air or land. The water that goes into the air comes back in the form of rain. There will not be any more fresh water after all that we have now is destroyed.