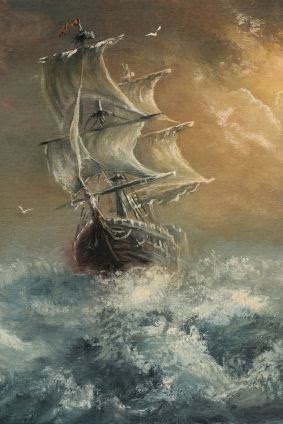 The emigrant ship Exmouth wrecked in a fierce gale on the Irish coast in the early spring, 1847, taking nearly 250 souls to the bottom with it. Only three people survived, all of them members of the crew who luckily scrambled up into a mast that fell into the crevice of some rocks, thus giving them a way of escape. Their story was told in graphic detail by the Illustrated London News.

The Exmouth was a small sailing ship of only 320 tons. She was classified as a brig, which meant she was both square and schooner rigged. She was under the command of Captain Isaac Booth of Sunderland when it sailed from Londonderry for Quebec on March 25. The ship had a crew of 11 and was packed with about 240 emigrants, mostly farmers and tradesmen and their families heading for new homes in Canada, plus three cabin passengers.

Within hours after sailing into the open sea and turning westerly around the northern tip of Ireland, the Exmouth encountered a gale that blew heavy squalls and heavy torrents of rain. The wind shifted to the north and increased in its fury, blowing the two top-sails from the bolt-ropes. By three the next morning two other topsails were blown out and the ship was being driven in the southeasterly direction. Booth chose to head for possible refuge from the storm rather than fight for the open sea, which turned out to be a mistake.

As the ship continued to be ravaged by the storm, the great seas tore the longboat from its davits, carried away the life boat and then stove in the bulwarks. The ship continued to take this kind of beating for two consecutive days, continuing through Monday night and into Tuesday, March 27.

At about 11 o'clock that night a light seen off the starboard quarter was wrongly believed by Captain Booth to be the light on Tory Island, off the northwest coast of Ireland. This made him believe he had ample sea-room for the course he was steering. But the gale had blown the Exmouth about a hundred miles off course. He realized too late that he was dangerously close to the Irish coast and set his crew aloft in a last-ditch effort to “claw” the vessel away from danger.

It was a losing battle, and by Wednesday morning the ship was being driven toward the land somewhere near the northwest entrance of Lochindaul. The ship was dashed broadside into the rocks, which they said rose to the height of the masthead.

As the story was told, “she struck violently against the rocks three times, and at the fourth stroke the mainmast went by the board and fell into a chasm of the rock.” The three sailors who escaped, John Stevens, William Coulthard and George Lightford, had scrambled up the rigging and consequently came down with the mast on the rocks, where they clung for their lives. “When they looked around after the sea had retired, the found that the captain and all (remaining crew members) were gone.”

A final wave carried the wreck back off the rocks where it disappeared under the sea, taking all of the passengers and the rest of the crew down with it. The survivors said “there was no cry from the multitude cooped up within the hull of the ill-fated brig, or at least it was unheard, for the commotion of the elements was so furious that the men on the top could scarcely hear each other at the top of their voices.”

Stevens, Coulthard and Lightford spent a fearful night clinging to that rock, enduring the storm until the next morning when they found a way of crawling off to the mainland. They found a farm house about a half mile away and soon reached shelter.
​
Only about 20 bodies washed ashore from the wreck. The rest still rest in the deep with whatever remains of the ship.