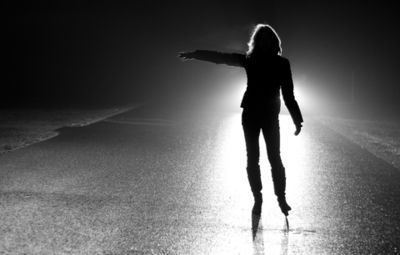 The Haunting On Meshack Road

There is something about the Halloween season that brings out the stories of ghosts, eerie events and haunted buildings. Where ever one may travel there are such stories to be told. At Glasgow, Kentucky, for example, there is a legend of the ghost of a young woman who haunts Meshack Road, a rural byway located at the little town of nearby Tompkinsville.

There are many stories of strange encounters with the Meshack Road ghost, but one of them has become somewhat of a legend. Because the names of the people involved and the time of this event are untold, there is no way of proving the story is real. But it is a swell ghost story worth passing on this season.

It seems that sometime about 1950 two young men were driving down Meshack Road, on their way to a local weekend dance, when they came upon an attractive young woman walking along the road. They offered her a ride into town and she accepted.

On the way the young men invited the girl to accompany them to the dance and she agreed. During the evening the girl danced with both of the young men and possibly other men. The other witnesses who saw her remembered her being at the dance, although they said she was a stranger to the area.

When the dancing was over, the woman agreed to allow the young men to drive her home. By the time they left the dance it was pouring rain so one of the boys offered her his coat. They said they let her off at an old house on Meshack Road.

A few days later the young man who had loaned the girl his coat stopped at the house in an attempt to recover it. When he knocked at the door he was met by an older woman who told him that no young lady such as he described lived there. She said she had a daughter who had died on the road years earlier.

During the conversation, the woman told him that the girl was buried at a nearby cemetery and churchyard. When he stopped to visit the grave, he found his coat draped over the headstone.