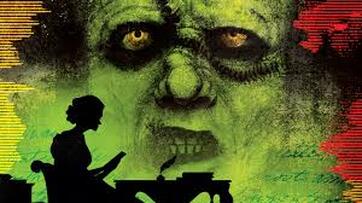 Visions Experienced In A 1816 Gathering

When we think of contemporary horror films we think of two inexplicable beasts of the silver screen . . . Frankenstein, the monster created by a crazed scientists trying to bring the dead back to life . . . and Dracula, the blood supping vampire that roams in the night. What is especially interesting is that the novel, Frankenstein, was written by Mary Shelley, the second wife of British novelist Percy Bysshe Shelley, on a dare while they were waiting out a stormy summer with other well-known writers in 1816.

Dracula is a Gothic horror novel created by Irish writer Bram Stoker in 1897, who in an indirect way, was linked to that same group of horror writers.

Both novels were forms of prophecy concerning contemporary times. Shelley envisioned the genetic engineering of life by contemporary science . . . the creation of mixed insect, animal and plant genes to produce odd concoctions of foods that may have long-range and harmful effects on the humans and animals that consume them. She may also have foreseen the possible genetic manipulation of humans.

The vampire story is a reflection of real humans who take from others, but fail to give anything back to society. Thus they are unbalanced creatures. They are the ones who suck the energy and the resources from everyone about them, always thinking only of themselves. The world is full of vampires. Stoker managed to put his finger right on the pulse of contemporary evil. Mary Shelley, the daughter of English writer and journalist William Godwin, wrote Frankenstein when she was just 19. It is said the Stoker’s Dracula was inspired John Polidori, an obscure writer present in that group, who wrote the first known story about vampires. The title of that work was simply: The Vampyre.

It is obvious that unique forces were present when this group of brilliant writers gathered in a place called Villa Diodoti on Lake Geneva, Switzerland, during the strange summer of 1916. Present at that gathering were Percy and Mary Shelley, Mary’s stepsister, Claire Clairmont, the writer Lord George Byron and Byron’s physician, John Polidori. It was during this gathering that Byron and Clairmont began a torrid and controversial love affair. They chose that place because Mary considered it an area sacred to enlightenment. It seems that John Milton, author of Paradise Lost, visited the place in the 1600s, and Rousseau and Voltaire had lived in the area in their day.

When they moved in the weather was perfect. But unknown to the group, the Indonesian volcano Tambora was erupting. That massive explosion is still remembered as one of the most violent volcanic eruptions in recorded history. The blast sent dust and volcanic ash into the stratosphere and caused incredible meteorological effects all over the world. In Europe and North America it was remembered as the year without a summer. Where the writers were staying was no exception. Torrential rains and incredible lightning storms seared the area, forcing everyone to remain indoors. It was said that the group entertained one another by reading aloud a collection of German ghost stories. One of the stories was about a group of travelers who told one another about personal supernatural experiences. This inspired Byron to challenge the group to each write a ghost story.

It was said that Percy Shelley produced an unforgettable story. Whatever he wrote apparently was never published, unless it was the haunting poem Manfred, which is a ghost story produced that year. Byron produced the fragment of a story which apparently was never finished. He, like Shelley, was a poet so the story may have materialized in one of his poems at a later time. As events went on that summer, he dropped all efforts at completing it. And Polidori wrote The Vampyre, which became the first modern vampire story. For some time, many thought Byron wrote this story, but over time it was realized that Dr. Polidori penned it.

Strangely, Mary Shelley was at first uninspired. She did not start writing anything. Yet she was haunted by the need to produce something. She spent a few frustrating days in which she attempted to turn her emotions into creative energy. One night the group got deeply involved in a discussion about life . . . whether scientists could galvanize a corpse into a “manufactured humanoid.” That night Mary experienced a vivid nightmare that she later wrote about: “I saw the pale student of unhallowed arts kneeling beside the thing he had put together. I saw the hideous phantasm of a man stretched out, then, on the working of some powerful engine, show signs of life . . . His success would terrify the artist; he would rush away . . . hope that . . . this thing . . . would subside into dead matter . . . he opens his eyes; behold the horrid thing stands at his bedside, opening his curtains.” The next day Mary knew she had her story and she began writing Frankenstein. She completed the novel in May 1817 and it was published the following year.