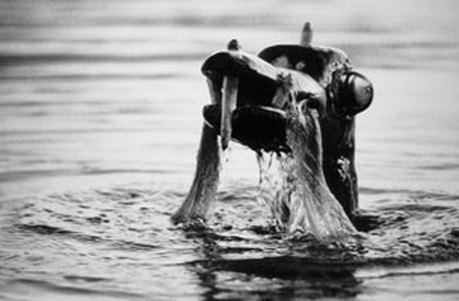 Fake Monster In The Lake

A news story some years ago about a Saline, Michigan man that created a mechanical beast to imitate the famed Loch Ness Monster in a local lake as part of a local Celtic Festival reminded me of a similar creation some years back on the Western side of the state.

I stumbled on the story when I was a reporter working for the Kalamazoo Gazette, in Kalamazoo, a city that joined Portage Township and Portage Lake.

I don’t recall his name or all of the details. As I remember it, an elderly gentleman who had lived all of his life on Portage Lake, told his story after years of fooling the people in the area with his cleverly concocted ruse.

He said he built his monster, which was a head and long neck supported on some type of floatation device, and a well-engineered system of ropes and pulleys that could all be operated from the lakeside porch of his home.

The man said he would go out at night during the summer months and set up his device, then wait for some unsuspecting fisherman or boater to show up in the area the following day.

Naturally the news spread. The story of the Portage Lake Monster was told in the area for years. Many people liked to embellish their “eyewitness” account of their sighting when talking to reporters. Some even said it had glowing red eyes and its back showed at least one hump if not two humps when it rose from the lake.

The sightings occurred every summer for quite a few years until the man started tiring of his game. Finally he let everybody in on his prank, getting the whole affair exposed once and for all. It was obvious he enjoyed boasting about the way he tricked the people of the area almost as much as he did playing his prank.

The Saline monster won’t be as frightening or as sensational because everybody in town knows about it. Builder Jim Peters, a festival volunteer, said he made his device because he thought a festival about Scotland needs a Loch Ness type of monster in the local lake.

His wood and steel monster is 24 feet long when floating under water, and rises six feet high when raised. Like the Portage monster, this one also operates on ropes and pulleys.

As for the real Loch Ness Monster that has been sighted for so many years, it wouldn’t be possible for a single prankster to live long enough to pull off a hoax like that. The people that have seen it are sure it is real.

To this day, however, nobody has ever proved it exists or doesn't.