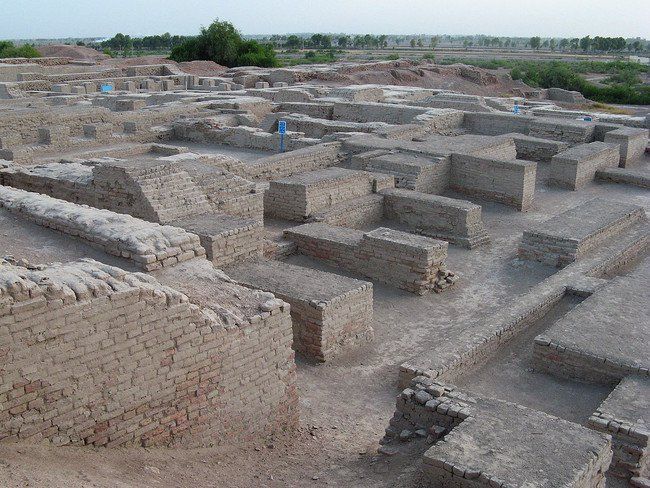 Pakistan’s “Mound of the Dead”

Of all the many clues to early great civilizations that once existed on this planet Pakistan’s “Mound of the Dead” is of special interest. This giant city, sprawling on the bank of the Indus River in Sindh, offers about 490 acres of grid streets, rectilinear buildings, public baths, large assembly halls, water wells, a waste water system and homes with bathing rooms and flushing toilets.

This site has many of the earmarks of a civilization that was rapidly advancing to a modern, non-warlike and health conscious life style.

Archaeologists that have been digging at this site since its discovery in about 1920, estimate a population of about 40,000 during the city’s hey-day, which occurred over 4,000 years ago.

The name of the site in the native Sindhi language is Mohenjo-daro, which means “Mound of the Dead.” But this has been the name the locals gave it because they didn't know what it really was. The city was long buried under the silt of river floods and age. Only the high part of the city was showing, a 39-foot high mound which researchers found to contain the homes, shopping center and baths enjoyed by about 5,000 members of the city’s special class.

The real name of the city has been lost to time. Some researchers speculate that the name might have been Kukkutarma “The City of the Cockerel,” since cock-fighting is believed to have been a ritual or possibly a business. Domesticated chickens were bred there. Some believe the city may have been a center for the breeding and world distribution of chickens.

It is known that communities like Mohenjo-daro that rose up in the Indus Valley during that period participated in commercial trade.

A unique feature of Mohenjo-daro is that the acres of rectilinear buildings appear to be part of a planned layout of street grids. The buildings were mostly built of mortared brick, some sun-dried mud-brick and even wooden superstructures. Most buildings were a single story but some two-story buildings existed.
​
While the city enjoyed a large central well, some of the wealthier households or neighborhoods enjoyed their own smaller wells. The waste water was eliminated through covered drains that lined the main streets. Some houses had inner courtyards.
One building featured an underground furnace that may have been used for heating water.

The very lay-out the city suggests careful urban planning and a municipal form of government that placed a high priority on hygiene. Despite the signs of intelligent municipal planning, there is no evidence at Mohenjo-daro of supreme leadership. There exist no temples or palaces suggesting a king or high priest. There is no sign that an army existed there either.

Thus Mohenjo-Daro gives all of the appearance of a major "modern" urban settlement. Since they were not war-faring people, the residents of the city were probably largely involved in farming or commerce.

Getting a handle on just how these people thought or conducted their business continues to remain a mystery even though they had a form of "writing." As of this posting the forms of script found on shells and other objects have not been deciphered.

Mohenjo-daro is an important archaeological site because it was one of the world’s earliest major urban settlements. It also was among the largest settlements of the ancient Indus Valley Civilization at about the same time great civilizations were appearing in Egypt, Mesopotamia, Crete and Norte Chico.

It is obvious that something important in human history had occurred at about this time throughout the world.

The reason for the decline of this amazing civilization also remains a mystery. There is no evidence of a military conquest. Examination of human skeletons from the site show that near the end of this period there was an increase in infectious diseases like leprosy and tuberculosis. There also was an indication of inter-personal violence that lacks explanation.

Theories range from climate change, flooding, deforestation, and possible changes in the course of the river.
​
The overall decline of this civilization may have been gradual, with the people slowly mixing in with other cultures. Their ancestors may still be hanging around.