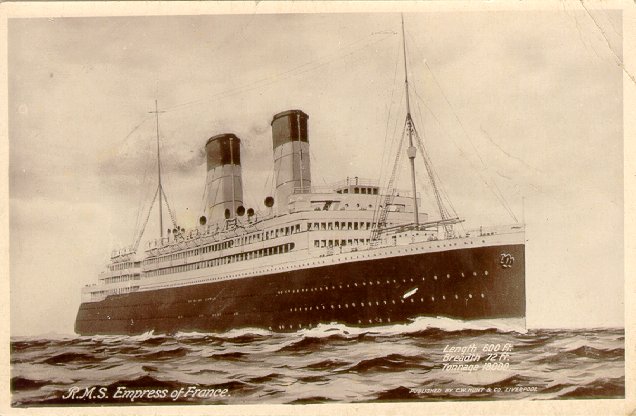 When she first entered the North Atlantic Service for the newly established Allen Line in 1913, the 571-foot-long Alsatian and her sister ship, the Calgarian, held the distinction of being the largest passenger liners operating between Canada and England.

Both steamers were registered at about 18,000 tons, and both were designed to compete with the larger Cunard and White Star Lines in offering passenger comfort and luxury.

These mighty ships were driven by turbine engines that drove four screws, thus reaching speeds of up to 20 knots. The Alsatian offered accommodations for 1,750 passengers and 500 crew members. The luxuries included a lounge, library, reading room, card room, smoking room, gymnasium, and spacious sleeping quarters. She also had a closed promenade deck for recreation in bad weather.

The ship's profile was two funnels and two pole masts, and a "cruiser" stern peculiar to warships, thus giving both of the new Allen liners a distinctive appearance. The funnels were painted black on the top, then white and red.

That the world was on the verge of entering a great war in 1913 was clearly evident in that the Allen liners were equipped with both wireless telegraphs and the latest in submarine signalling equipment. Just what this equipment was intended for is not clear in the old news reports.

Alsatian was quick to join the war effort, however. She served as an armed merchant cruiser from August 1914 until December 1918. During this time she helped rescue the crew of the Oceanic, a White Star Liner that wrecked in September, 1914. When the Allen line was sold to Canadian Pacific, the Alsatian was given a refit and renamed Empress of France.

The Empress returned to service as a liner in the fall of 1919, carrying passengers on the North Atlantic. In July, 1921, she set a record for making the fastest round trip from Liverpool to Quebec and back to Liverpool.

In 1924 the ship was laid up for another refitting, and this time her engines were converted from coal to oil burners. At about that time she made several around the world cruises.

The ship made her final voyage from Southampton to Cherbourg, Quebec in September, 1931, and was laid up. The great depression caught up with her as it had so many other fine ships. She was scrapped in 1934.