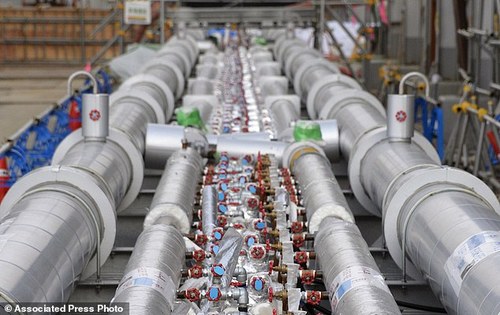 Tokyo Electric Power Company (TEPCO) recently completed what may be described as a “last-ditch effort” to contain leaking radioactive water from the company’s four damaged plants at the Fukushima Daiichi nuclear power facility.

The company spent $312 million building a mile-long underground refrigeration system around the crippled reactors in an attempt to create an “ice wall” that might stop the volumes of radioactive water that have been leaking into the Pacific Ocean. The idea was to freeze the soil to about 100 feet into solid bedrock thus creating an impervious wall that would prevent groundwater from coming in contact with the radioactive wreckage filled with deadly plutonium.

Within days after turning on the massive refrigeration system, company officials revealed that it failed. They said the ground temperature did not fall low enough to create the desired wall of ice.

Thus TEPCO finds itself back to square one in its battle to fix a disaster created by a powerful earthquake and tsunami that struck the power plant in 2011.

The volumes of contaminated water and airborne radioactive waste have been pouring into large portions of the vast Pacific Ocean, reaching all the way to the U.S. coastline. A giant cloud filled with cesium-137 has been contaminating the air and falling with rain over Canada and the United States. Nearly every animal and human living east of Japan has been exposed.

The governments of both Japan and the United States have been quiet about this disaster even though the radiation is believed to be starting to affect the health of some people; especially those that work out of doors.

Researcher Michel Chossudovsky, author of an on-line e-book Fukushima: A Nuclear War Without a War, says he has posted his book on Global Research in an effort to inform the public about the extensive cover-up that has been going on since the disaster.
Chossudovsky wrote: “What prevails is a well-organized camouflage. The public health disaster in Japan, the contamination of water, agricultural land and the food chain, not to mention the broader economic and social implications, have neither been fully acknowledged nor addressed in a comprehensive and meaningful fashion by the Japanese authorities.

“Japan as a nation state has been destroyed. Its landmass and territorial waters are contaminated. Part of the country is uninhabitable. High levels of radiation have been recorded in the Tokyo metropolitan area, which has a population of  39 million (2010) (more than the population of Canada, circa 34 million (2010)) There are indications that the food chain is contaminated throughout Japan: Japan’s industrial and manufacturing base is prostrate. Japan is no longer a leading industrial power. The country’s exports have plummeted,” he wrote.

Why would such a terrible disaster be kept so secret? Why is the Japanese government willing to expose its people to so much radiation that they face a grim future of cancer and death from severe radiation poisoning?

The answer, of course, is money. Japan is a leading producer of hi-tech components for electronics, cars and machinery. Chossudovsky wrote that “the entire East and Southeast Asian industrial base – which depends heavily on Japanese components and industrial technology – would be affected. The potential impacts on international trade would be far reaching.”

Propaganda specialists have attempted to compare the Fukushima disaster with the horrors that occurred at the Chernobyl facility in 1986. But they forget to point out a striking difference in the outcome of these two nuclear events.

At Chernobyl, as terrible as that disaster was, once the single reactor melted down and cooled enough, workers managed to cover the entire site with a concrete sarcophagus that has effectively sealed the radiation from spreading farther than it already has. The Chernobyl site is left empty and uninhabitable and will stand as a monument against nuclear insanity for hundreds of years. But it will not spread.

The Japan disaster is not contained. And from all indications, it may never be. The plants were constructed in line at the edge of the open sea, over a major fault line, and in the heart of a heavily populated area in a major industrial nation. Thus the uncovered and unconstrained 4,400 tons of nuclear fuel rods, which have gone into melt-down, are dwarfing the radiation levels shown at Chernobyl. And they are threatening not only the nation of Japan but the entire Northern Hemisphere of the world.

Every effort to even look inside the destroyed structures and get a glimpse of the damage and the location of the fuel rods that need to be  removed have failed. The radioactive count is too high for any human, even dressed in heavy lead-lined suits, to approach safely. Even especially designed robots drop from the radioactive heat within minutes after entering the plants.

The rods are being constantly flushed with water to prevent a massive radioactive explosion. No one can imagine how disastrous an explosion those tons of plutonium might generate. The constant flushing is taking its toll. There is so much contaminated water it cannot all be contained.

The U.S. Navy attempted to assist as the site after the disaster. The result was that 16 naval ships, including the carrier USS Ronald Reagan, were contaminated with radioactivity. An untold number of U.S. sailors were exposed to so much radiation that they are now suffering from a variety of health problems.

If we believe the "official" lies about the situation at Fukushima people in Japan, the United States and even Western Europe might believe the crisis at Fukushima has been contained and we can all go on with our lives. In fact, one recent news report said that the Japanese people with property near the plant will soon be allowed to return to their homes again.

In reality, however, the plant is leaking unconfirmed amounts of plutonium. This stuff is a heavy metal so dangerous that one millionth of a gram of it, if inhaled, can cause cancer.
​
For all practical purposes, Japan has been destroyed as a key industrial nation and possibly as a safe place for human habitation for many years go come. The disaster at Fukushima cannot be swept under the rug and forgotten. The radiation is leaking and it is reaching out with deadly fingers to touch the lives of millions around the world.