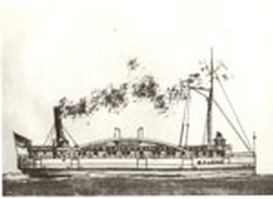 Wreck Of The Galena

Captain Warren Broadbridge spent Tuesday afternoon, September 24, 1872 supervising the loading of 272,000 feet of lumber. He also had a wary eye on the sky while his boat, the propeller Galena, lay moored at Alpena, Michigan. Even when he brought the vessel into port earlier in the day the weather was windy and boisterous. By late in the afternoon it was clear that a gale from the southwest was building.

Broadbride knew his scheduled trip to Chicago was going to be rough. He was still considering the weather as passengers began boarding the Galena that evening. Departure time was 11 p.m. so the five passengers booked for the trip didn’t start arriving until after supper.

He made the decision at ten o’clock to sail on time in spite of the looming storm. He told first officer William Walker that he knew the gale would give them trouble until the vessel cleared North Point, but after that, the Galena would have the wind at its stern during the trip north into the Straits of Mackinac.

The captain’s concern about North Point was well founded. The Galena steamed out of the safety of Alpena harbor promptly at 11 p.m. Broadbride later said he steered the boat in what he thought was a wider than normal arch around the point and believed he was safely clear of it when he gave the order to the helmsman to steer north. The captain didn’t have the benefit of modern sonar in 1872. He did not know that the wind out of the south had blown his command farther off course than he believed possible. By midnight the vessel was hard aground on the outer reef, about a mile and a half from shore.

The 193-foot-long wooden propeller slammed into the rocks with a sudden jolt that threw passengers from their bunks and rattled pans in the galley. Broadbridge grabbed the chadburn and sent the order to the engine room to reverse the engines. His first hope was that the ship could break free and that the hull was not severely damaged. But the steamer didn’t budge.

Inspection below deck by the crew revealed a large hole in the hull near the bow. And the heavy seas were pounding the Galena with such force Broadbridge stopped trying to break free. Instead he ordered the vessel scuttled. The idea was to literally sink the boat in shallow water, thus stabilizing the hull and keep it from pounding to pieces. Wooden ships in those days didn’t take much of an assault from heavy seas before they broke up into a total wreck.

The Galena settled in shallow water at a slight list. The cargo of lumber creaked and groaned as it adjusted to the tilt of the ship.

Thus began a period of anxious waiting for the estimated 20 souls on the 25-year-old steamer. The gale continued throughout the night and into the following day. With the engine room flooded there was no heat. Waves rolled over the decks, buffeting the cabins and threatening to destroy the ship.

The steamer Wenona passed the wreck on Wednesday morning, cautiously making its way against the gale as it entered Thunder Bay after a rough trip down the coast from Mackinaw City. The captain said the crew and passengers were still aboard the Galena, large waves were breaking over the upper superstructure and he was afraid the old steamer would break up. He said he could not get close enough to safely take aboard survivors without running his own boat on the same reef.

At about 2 p.m. the baroque Erastus Corning, Captain George H. Clarke, spotted the Galena while passing the point on its way down the lake to Detroit. Clarke ordered the sails taken in and the anchors dropped when about two miles from the wreck. He sent four sailors in a yawl boat to attempt a rescue.

The sailors reached the Galena after about an hour of hard rowing. They were surprised to find everybody aboard the Galena in relatively good spirits and the crew still hopeful that the storm would abate so the Galena could be saved. Nobody was willing to leave the Galena and take advantage of the Corning’s offer of rescue.

By about 9 o’clock that night, however, Broadbridge was having second thoughts. The storm did not ease at sundown as he expected. In fact it seemed to be getting worse. He decided that if four sailors from the Corning could successfully bring a yawl across two miles of that violent lake to check on his crew’s well-being, he could get a yawl across the one and one-half mile stretch of open water to shore.

A boat was lowered from its davits on the lee side of the wreck and a delegation consisting of Captain Broadbridge, clerk J. C. Gilchrist, second officer M. Cook, engineer E. Moshier, a wheelsman, a watchman and all five passengers made the perilous journey to shore.
First officer Walker and a small number of crew members elected to stay with the ship. Broadbrige’s boat arrived on shore about an hour later. Everybody was cold and wet. They walked several miles into Alpena, arriving early on Thursday morning.

By Thursday afternoon the Galena was showing signs of breaking up and Broadbridge abandoned his command. He brought a boat back to the wreck and removed the rest of his crew.
​
Several trips back to the Galena were apparently made because the sailors also began removing personal possessions, including tools, bedding and even some of the furniture. By the time they were finished a story in the Detroit Daily Post said one of the Galena’s arches was gone and it looked as if the hull was broken. The storm that wrecked the Galena continued blowing for several more days.