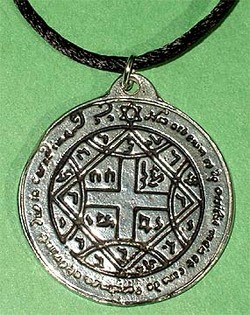 Do Amulets Really Protect Us?

I think my first experience at trying out an amulet as a protection against evil spirits and bad luck occurred when we were living with the Indians.

It was while with the Navajo in Arizona that I was presented a gift of a small crystal wrapped inside a cowhide pouch designed to be worn around the neck. I was told that it would bring me good fortune and assist me on my spiritual path.

I remembered the amulet because my late wife Doris found it while digging through some old boxes filled with stuff that has been stored and traveling around with us for a few years. The crystal was still in the pouch, along with some needles from a cedar tree, once planted by my wife’s father that grew on the family homestead.

I put the cedar in the pouch because it was suggested that I needed something personal from the Earth to carry with me after we sold the land and moved to Arizona. But that is another story.

I found that I did not like to wear that pouch because it involved a restriction around my neck. I have problems with rings, wrist watches and tight fitting stockings. I just don’t like wearing things that bind. Even though the leather strap hung loosely around my neck, it became a constant irritation. Thus the whole amulet went in the box where it remained until Doris found it again.

Would it have been beneficial? I suppose it depended upon me. If I believed the crystal and cedar was going to help it probably would have.

In a brief study of amulets, I realize that people everywhere use them constantly in an effort to bring good luck. Things like St. Christopher emblems on the dashboards of cars, rabbit’s feet on key chains, lucky shirts worn by athletes during competition, a horseshoe hung over the door of a home and garlic to ward off vampires are all examples of amulets.

A description of an amulet, if you haven’t already figured it out, is some kind of protective device worn around the body or placed on doorways or near where we work or live, to protect us from evil spirits or bad luck.

Amulets may come in so many forms . . . all inanimate objects . . . that it is difficult for us to recognize them when we come in contact with them.

Copper bracelets worn around the wrist or ankle to ward off arthritis, a photograph or lock of hair of a loved one stuffed in a wallet, or simply a ring or other piece of jewelry, could be someone’s lucky amulet.

The Navajo couple we lived with for a while in Arizona not only liked crystals, but they regarded eagle feathers as very powerful objects. When an eagle dropped a feather in our front yard one day, it was carefully placed on a wall over a door in the home.

The Navajos used locks of people’s hair for sending magical power, either positive or negative, in the direction of the person who lost the lock of hair.

As stated earlier in this piece, the amulet seems to find its power in the individual. If a person believes it will work, then it may just have some kind of power.

It is a lot like prayer. If we believe in the god we are praying to, whether it is a rock, a tree, or some spirit hovering in the clouds over our heads, the prayer will probably be answered. But then, again, the issue might be resolved even if no one prays for its resolution.

As for me, the amulet seems to have no place in my life. I see them around, and have even had them in my possession. But they are just trinkets to me. Sometimes they evoke fond memories, as the crystal amulet did when Doris found it.