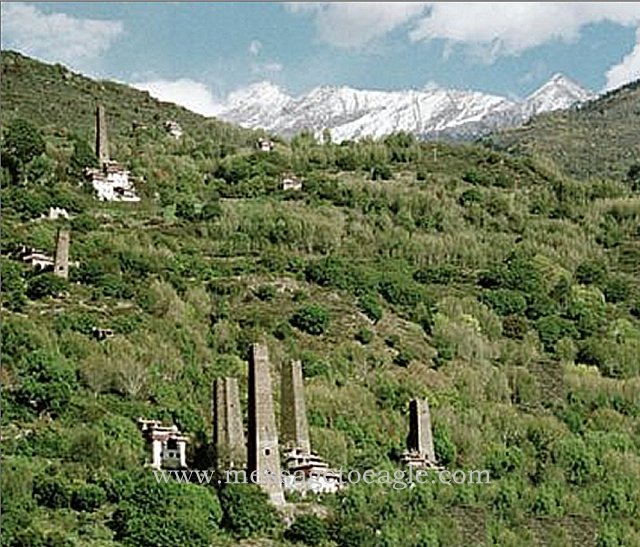 Is Kongpo Creation Myth A Recollection Of Genetic Tinkering?

Watching a late-night television documentary about a quest by French researcher Frederique Darragon in southwestern China and Tibet, a brief mention of local mythology caught our attention.

Darragon visited and photographed an estimated 200 strange multisided towers throughout the region for the Discovery Channel special. She also took samples of wooden floor beams and carbon dated them. Some of the towers were as much as 1,200 years old.
While their origins were not included in local mythology of the region, the natives had a strange name for the towers . . . bdud khang, or “demon houses.” All were open structures, most had window type openings at different levels, and were several floors or stories tall. No one knew why they were built or who make them.

The documentary stated that the Kongpo people consider themselves Tibetan. “They all believe in the creation myth of the children of the she-demon and the monkey,” a report on a Discovery Channel website said.

“The contemporary Jiarong and Minyag people as well as the Tamang of Nepal, who are also Buddhist, and the Qiang Zu, who are not Buddhist, also believe in the same creation myth.”

Why is this significant?

It means that local mythology carries a story that precedes Buddha. Also significant is that the myth appears to be the backbone of whatever religious belief system exists for the Qiang Zu people. The story has continued to exist in spite of the fact that the territory is under the rule of Communist China, where religious belief systems have not only been discouraged, but illegal for about half a century.

Because the people of the area are illiterate and isolated from the outside world, tracking the origins of the myth and the builders of the towers was blocked from Darragon, even though she traveled to the area on several occasions and spent a lot of time with the native people.

The stories were almost non-existent. But there was that one thread . . . the creation story involving the children of the she-demon and the monkey. Where did that originate?
Anyone who has studied the ancient stories in the Book of Enoch, Epic of Gilgamesh and the Book of Genesis, knows something quite profound appears to have occurred on Earth an estimated 40,000 years ago.

Some believe the “gods,” or entities described in the stories were myths, or human memories of an alien race that visited Earth and altered the genetic makeup of the primate, putting its own DNA in the beast and turning the ape into a human. The first woman, Lilith, was a hairy ape. Eve, Adam’s second wife, was hairless.

The old stories talk about gods coming down and fornicating with the women, and creating children who became giants on the Earth. Were the gods not aliens who came in ships out of the skies? Yet if the various animal species on earth cannot inter-breed, how could beings from other worlds accomplish it? The implantation of new genetic information in the cells of unborn children would be the only way. If it happened among the primates, this event could have been interpreted as “fathering” of altered children.

That the children were clearly different is reflected in the description of them as “giants.” That does not necessarily mean that they were larger in stature, although it might have reflected a more upright stance. What was more apparent was that the children were smarter and hairless. They grew up to be a superior race of humans living in a world of apes. Indeed, they were giants among the natives.

It is odd that the natives of Tibet would remember the women who bore these children as “she-demons.” Indeed, the spiritual beings that walk the Earth on an astral plane are marked in religious circles as demons. According to religious teaching, the demons are reflected as evil, while the angels are considered good.

That these women were presumed to have submitted to the sexual desires of the gods marked them as she-demons. That they were apes when this occurred is reflected in the monkey part of the myth.
​
To know and understand the truth is to realize that we have been fooled for a very long time