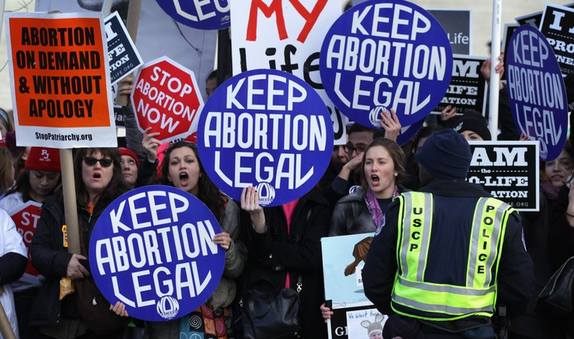 Women of reproductive age living in the United States today are subject to a growing number of state and federal laws controlling their right to accept what happens in the womb during and after a male sexual encounter. The extreme right-wing-Christian-controlled fanaticism is getting so ridiculous that we would not be surprised if women didn’t start to choose chastity belts rather than consider the joys of a loving relationship with men.

Since the Supreme Court handed down its Roe vs. Wade ruling in 1973 declaring abortions legal, states have responded with a variety of local laws codifying, regulating and limiting the circumstances under which a woman may obtain an abortion. Most abortion clinics in the country have been forced to close because of local ordinances and often because of violent attacks against the doctors and nurses employed by them.

Last week the House of Representatives in Missouri voted to support Senate Bill 5 which overturns a city ordinance in St. Louis that prevented discrimination against women who have had abortions. The new law now makes it legal for employers to fire women for either having had an abortion or even using birth control. The law also makes it possible for landlords to evict women for having an abortion, getting pregnant out of wedlock or using birth control.

And while this is going on at state levels, the male-dominated Republican controlled legislators in Washington have been busy fabricating a revision to the Affordable Care Act that would not only strip health care for millions of middle class and poor citizens, but defund Planned Parenthood. This service provides birth control services for impoverished women, cancer screenings and basic reproductive services.

In an interview with reporter Amy Goodman last week, Dr. Willie Parker, an abortion provider and chairman of the board for Physicians for Reproductive Health, spoke out against efforts to shut down Planned Parenthood and make abortion services available to only the wealthy.

"It strikes me as odd that the people who are ideologically driven to reduce abortion in this country are going to reduce the very services that make abortion unnecessary,” Dr. Parker said. “So, hundreds of thousands of women got their birth control through Medicaid coverage because it was a preventive service, and as a result of that, we've seen the lowest number of abortions in this country since it became legal."

By attacking birth control services it seems that the “Tea-Bagger Republican Christians” in Washington are setting up women for forced pregnancies and unwanted children they cannot afford just because they believe it is morally wrong to be sexually involved with a partner just for pleasure.
Making the situation even worse, some of the state laws are making it illegal for women to abort a pregnancy even if it involved a case of rape.

Bearing a child in today’s already overpopulated and unemployed society is extremely costly. The price of raising a child, meeting all of the state and federal laws involving the raising of children, and paying for their education has become so prohibitive that many women are choosing not to have children at all.

So beware you ultra-conservative men in legislative jobs, the chastity belts may soon be fashionable among the fair sex. You soon may be paying dearly for your sexual prowess if you can get it at all.