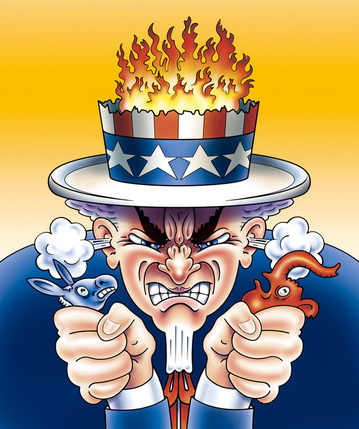 A Writer Sick of Politics

I gave up cable television over a year ago in an effort to get away from media misinformation and the looming barrage of political propaganda that was going to dominate any programming we might choose to watch. But getting news via the Internet has not provided much relief.

Every news venue chosen, except perhaps the foreign press, displays what has become a foul name: “Trump” in bold headlines. It appears that we must be told about every move that character makes, every day of the week, every hour of the day, short of his visits to a toilet. The media appears to lean on every insane word the man makes. Followers have not lost their zest for the constant barrage of Trump stories even when highly respected columnists tell us they think the man is a poor presidential choice with dangerous ideas.

So why is the media still following this pestiferous character around like ants after a lump of sugar? Early in the primary campaign CNN’s Money quoted columnist Frank Rich as explaining that Trump “is the one who’s made this race interesting.”

And that seems to be the Trump strategy. The man has been so unorthodox in what he says and the way he is behaving, reporters can’t resist writing about him. That gives him dominant and free press coverage.

And as learned early in my years of reporting the news, all media attention is good attention, even if the story is negative. A lot of people in the United States are angry at the way their government has been behaving. They are quick to judge without checking the facts. Thus they are willing to believe the insane things Mr. Trump is telling them.

Trump's claim that he intends to deport “illegal aliens” to Mexico is among his most silly promises. The American/Mexican coalition in this country has become so complex and varied over the years it would take a lengthy nationwide door-to-door police action by a costly new government bureau to weed out every “illegal” person. The legal ramifications involved in breaking up families of people who secretly slipped over our borders, then got jobs, married and had children born in the U.S., could be overwhelming. The process could be another unending boondoggle comparable to the wars on drugs and terror.

Because they appear to suffer from memory lapses the Trump follows also are accepting as truth the Republican lies that now are blaming President Obama for the 2008 financial crash, the Middle East wars and even the 9-11 attack, even though it was the George W. Bush administration that was in the White House when all of this happened.

And supporters think Trump, who is promising only that he will “fix” everything but offers no platform to back up his claims, might be the guy who will clean house in Washington.

And oh, my, do the people want to perceive a house cleaning in Washington! The problem is that Trump seems to constantly fall back on his debts and promises on every business venture he has ever made. With this recorded history, what makes his followers believe he will really or even wants to "fix" the complex issues now binding decision-making on Capital Hill?

The problem with this picture is that nobody believes Hillary Clinton, the Democratic candidate, is up for the housecleaning job either. The Clinton's had their chance during the eight years Hillary and Bill operated at the top of the heap. It appears that their actions, while they left us with a balanced national budget, opened the doors for all of the shenanigans performed by the banks, the high court and big corporations while Mr. Bush had his hands on the reigns. How can we expect her to do any better next time?

And worst of all, neither candidate is talking seriously about the global warming issue. They blab on and on about terrorism, racial, financial and medical issues while the world is getting battered with some of the most severe storms, heat and flooding ever recorded. The global ice caps are melting away. The air is thick with carbon and methane gasses that are poisoning us and heating the planet. Another toxin that is now added to the mix is a major build-up of radioactive isotopes pouring not only from the Fukushima disaster in Japan, but aging nuke power plants all over the world. Something has to be done now if we expect our children and grandchildren to be left with a habitable world to live on. But this does not appear to be an issue on anybody’s mind this election year.
Trump proclaims that global warming is a hoax. He won’t talk about it. Hillary at least has acknowledged this problem exists.

The things Hillary has going for her is (1.) she understands the operation of Washington politics, (2.) she has experience in world diplomacy, and (3.) she is not Trump.

But she is still a Clinton.

I have become so sick of this political mess I want nothing more to do with it. I don’t want to hear any more of the garbage laced rhetoric pouring from the lips of either candidate. I am sick of the daily bombardment of telephone calls and e-mails by political organizations either soliciting my vote or polling my views.

I am extremely angry after learning that my vote in the primary election, which was cast for Bernie Sanders, was never counted. I suspect it was one of the thousands of mailed votes that were purposely “misplaced” or “hacked” in what I believe was a national election scam designed to make sure Hillary and Donald got the nods. Thus I am wondering if I want to make the effort in the general election to vote at all.

I will probably vote, if only to deal with state and local issues. But I may not vote for either Hillary or Donald. I am not sure who gets that vote.
​
In the infamous words of Hillary while enduring a Republican drama over the Benghazi mess: “What difference does it make?” It appears that the die is cast. We must endure whatever the secret kings behind the curtain hold in store for us over the next four years or go down in flames.