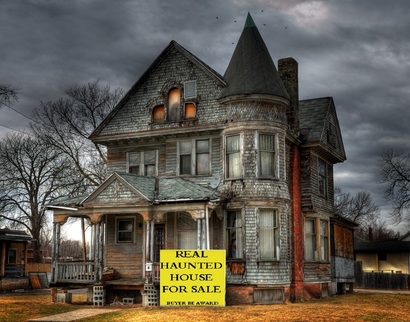 The new rage among realtors in selling haunted houses may seem peculiar. But in this new somewhat insane world, people are demanding strange and exotic things. Why wouldn’t they be interested in owning and sharing a house with spirits of the past?

What surprises me is that buyers are being goaded into paying extra to purchase a home with ghosts. In my years of reporting and because of the hobby my wife and I shared, of buying and restoring old homes, I can report from personal experience that most older homes are usually haunted.

Sometimes it takes a few months of living in a house before you discover the spirit that lives there with you. On other occasions, face-to-face encounters occur quickly.

It isn’t that we actually see the spirit. But the mere presence of a wraith in a particular room can sometimes make the skin crawl, give us the sensation of a chill, and we can be overwhelmed by an uneasy sensation that makes us want to leave the room.

My daughter and I were walking through a large two-story downtown building we had just bought in Michigan when we discovered a second floor room that really gave us the heebie-jeebies. We couldn’t put our finger on just why we had this sensation. We just did not like being in the room and got out of there quickly.

The building was an old Masonic Hall that had been used by the community as a court house, police station, jail, speak-easy during prohibition, community meeting building, and lastly a township hall before it was abandoned. The building, which was among the oldest in the region and marked in the Michigan Historical Registry, was in serious need of repair. We were taking it on as a project after buying it for a dollar.

That building turned out to be the most haunted structure we have ever encountered. You couldn’t shoot a photograph in it without having the print filled with orbs. Orbs are little circular images of light that the camera sees, but they appear invisible to the human eye. We have always theorized that spirits show up as orbs when they are around but we can’t prove this.

That upper floor room was spooky enough. But the worst part of that building was the basement. It could only be entered through a rear door that opened into a vast dark room. There were no windows. There was a single light hanging from the ceiling just inside the door. At the far end of the room, which is under the front of the building and once had a door access to the street, are the remains of the old police office. Two jail cells still remain in place, their doors swung open. It is here where the most frightening spiritual encounters were experienced.

There were times, while working in the building, that we heard strange noises coming from the basement, even though we always kept the door locked. Once there was a loud crash that shook the building. When we investigated, nothing was found.

I would not declare that particular building to be a safe place to live with spiritual forces. We suspected that the building had a long history that attracted a lot of spirits to gather there. Some of them may have been kindly, but others were obviously angered at what we were doing in the building.

When we owned older homes that proved to be occupied by a ghost, we usually discovered that some earlier resident had died violently there. Two homes that we owned, occupied and repaired were the scenes of suicides. The entities that lived with us were not friendly. They made noises in the night. There were flies and wasps that filled unoccupied rooms. Lights sometimes went out for no apparent reason. The family suffered severe illness, a dangerous fire and problems just getting along with one another while living in one of them.

Haunted buildings can be problematic. But in other cases, we lived with spirits that seemed to enjoy our company. While we became aware of their presence, they did nothing to try to drive us away. In one apartment we lived with the ghost of an elderly lady who liked to sit in a rocking chair by the window. Sometimes I could hear her footsteps walking over the wood floor but when I looked, there was nothing there. We learned from the owner that the woman was found dead in her chair at that window.

We lived in one house for about a year before we discovered that we were sharing it with a spirit. I suspect that many homes are haunted like this, and people have no idea that ghosts are sharing the building. If we are accepted by the spirit, we all can usually get along quite well.
​
When my wife and I lived one winter with a Navajo family in Arizona, we learned that those people try to never allow anyone to die inside a house. If it happens, the building is abandoned. Tribal members are literally carried out in the yard to die rather than allow their spirit to linger in the house.