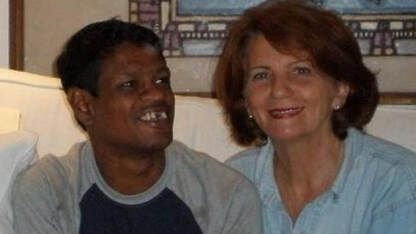 Elizabeth Clayton and Kumar
The Chicken Boy And Other Stories

There is a strange tale about a Fijian man who was reportedly raised in a chicken coop and consequently behaves like a chicken. His name is Kumar, who in his mid-30s is now under the care of Elizabeth Clayton, widow of the late famed New Zealand mountain climber Roger Buick. Clayton said when she first met Kumar he pecked at his food and crouched down as if roosting. He communicated by making a rapid clicking noise with his tongue. As the story is told, Kumar’s mother committed suicide and his father was murdered when he was very young. The grandfather locked him in a chicken coop where he then lived for years. He apparently escaped the coop and was found in the middle of a road. Authorities took him to a welfare home in Suva where he was found by Clayton.

In Clayndon, Maryland, people are amazed at a strange beast that has moved into their neighborhood. They can’t identify it so are calling it a “hyote,” since it looks like a cross between a hyena and a coyote. The creature lives in a wood, but is friendly and comes right up to people’s houses. It was photographed by a local television network.

While everybody knows that a mule is a cross between a horse and a donkey, and that they are sterile. A mule in Dorikha, Bhutan, a tiny kingdom in the Himalayas, reportedly gave birth to a foal. “Book on mules say that it is impossible,” said Dr. Tashi Samdrup. “Investigation done in some countries, however, found out that the mules turned out to be donkeys in reality.” Since the mule that roams free when it got impregnated nobody knows just what kind of animal it mated with.

In Birmingham, England, a two-year-old boy was brought back to life more than seven hours after he was found drowned and frozen in a garden pond. The boy’s parents began heart massage and mouth-to-mouth resuscitation before paramedics arrived, then hospital personnel brought him back to life with constant heart massage and slowly warming his frozen body. The heart began beating after five hours and eventually the boy made a full recovery. Doctors say the fact that the body got as cold as it did, protected the brain during the time the heart and lungs stopped pumping critical blood and oxygen.

A severed human hand mysteriously dropped out of the sky and onto the deck of a yacht docked at Long Island, New York, interrupting a party. The boat’s owner told police he heard a noise, went out on the deck and found the hand. Authorities still don’t know where it came from or whose hand it was.

Then there is the strange case of a woman in Traverse City, Michigan, who received angry call-back messages from irate people all over the country who accused her of making harassing telephone calls. They said Becky Sivek was making up to twenty or more calls to their number in a day, then hanging up when they answer the ring. They track the source of the call through caller identification. But Sivek says she was not making the calls. At the time of this phenomenon, she didn’t even subscribe for long distance telephone service. Authorities said the calls didn't show up on her monthly telephone bill.