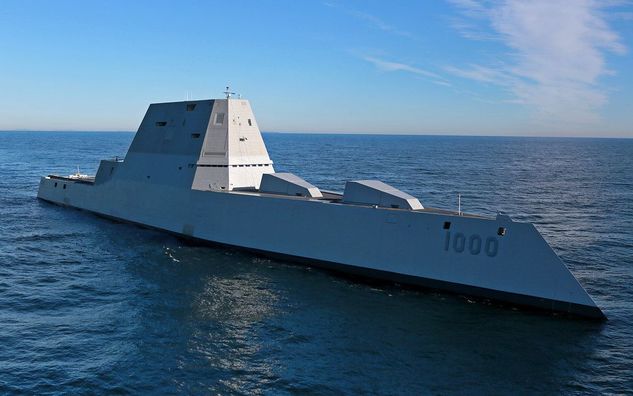 Among the new and peculiar looking naval ships emerging from the famous Bath Iron Works of Maine in recent years is the USS Zumwalt, a giant 600-foot-long destroyer that represents an entirely new class of fighting vessel. The designers claim that its sloped hull makes it harder for radar to find because it is only seen as a small fishing boat.

Critics say the $4.4 billion spent in designing and building this ship is an extravagant waste of taxpayer dollars.

Much about this new ship is top secret. In fact it is so encased in metal that even its guns and other tools of war are totally obscured from outside view. In spite of its massive size it only takes a crew of less than 150 to operate. Its deck can accommodate aircraft and there are reports that its guns offer “incredible attack power and accuracy."

Unlike naval destroyers of the past, this monster is especially designed to help ground forces on land rather than only participate in battles on the open sea.

We also know that the Zumwalt, named for former Chief of Naval Operations Admiral Elmo Russell Zumwalt, Jr., is driven by two Rolls-Royce MT30 gas turbines and can reach speeds of up to 3.5 knots or 38.6 miles per hour.

The Zumwalt is rated as a “guided missile destroyer” and the lead ship of what is to be a new Zumwalt class of ships of this particular class. The vessel has stealth capabilities and advance radar and detection devices that make it not only difficult for the enemy to find but  uniquely capable of observing enemy operations.

The ship was launched in 2013, went through extensive sea trials, and was commissioned in Baltimore in October, 2016. Its home port is San Diego, California.

During the sea trials, while under the command of Captain James A. Kirk (not the Star Trek skipper), Zumwalt answered a Coast Guard call for assistance when a fishing boat captain was experiencing a medical emergency 40 miles off the coast of Maine. When the Coast Guard helicopter was unable to hoist the patient from the fishing boat the Zumwalt’s crew used an inflatable boat to successfully transport the man to safety.

The Zumwalt got into trouble in November, 2016, while passing through the Panama Canal on its way to San Diego. The ship’s drive shafts failed because of sea water that got into some of the bearings in the advanced induction motors, causing the destroyer to hit the lock walls. Tugboats were used to push the vessel on through the canal before repairs could be made.