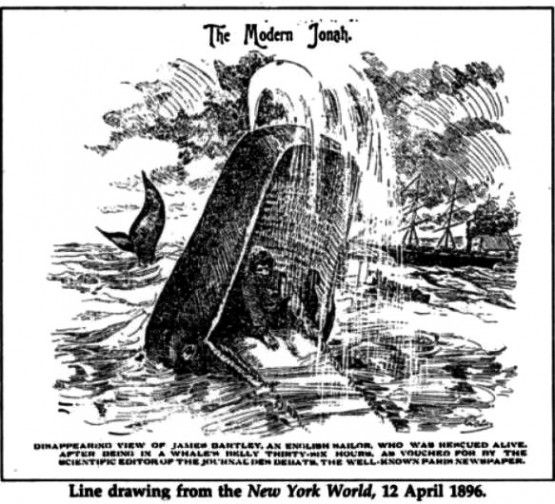 Was James Bartley Really Swallowed By A Whale?

There is a strange story of a modern Jonah, a sailor named James Bartley who, in 1891 was knocked overboard while working on a whaling ship in the South Atlantic. As the story is told, Bartley was recovered a few hours later, still alive, inside the belly of a whale that the crew harpooned and brought aboard their ship.

It is a wonderful story that might well have flowed from the pen of noted American author Herman Melville. Rather than a great white whale dubbed Moby Dick, however, this crew from the Star of the East was working from long boats, in pursuit of a large sperm whale a few hundred miles east of the Falkland Islands off South America.

The men sunk a spear into the side of the whale, only to have the creature dive deep into the sea, pulling eight hundred feet of line before starting back up again. When the whale surfaced it came up right under one of the two longboats, smashing the boat and throwing its occupants into the sea. Beckley was one of two men who went missing.

The whale eventually died from its wound and the creature was pulled up to the side of the ship to be cut up. That evening as the men worked by lantern, they hoisted the whale’s stomach and liver onto the deck and noticed movement within the stomach. It was cut open and there was Bartley, unconscious but alive. He had been in the whale’s stomach for 15 hours.

As the story is told, it took Bartley several weeks to recover from what happened to him, and he returned to his home in Gloucester where he lived until his death in 1909. His tombstone allegedly reads: “James Bartley – 1870-1909 … A modern Jonah.”

This tale has appeared on many Christian Internet sites as proof that the story of Jonah in the Bible could have really happened. Other sites present the Bartley story as an unexplained mystery. Surely the details of the account are sharp and there was, indeed, a ship known as the Star of the East that sailed the high seas in 1891.

The website Truth or Fiction turned to research by Edward B. Davis, a professor at Messiah College, Grantham, Pennsylvania, who sought to prove or disprove the Bartley story. His findings, published in The American Scientific Affiliation in 1991, found that the story was merely a sailor’s yarn that got published as a true story so many times, it was accepted as fact.

Davis found a letter written by the wife of the captain of the Star of the East, Mrs. J. B. Killam, who said she traveled aboard ship that year and knew from personal experience that there never was a James Bartley working as a member of the crew, and that no workers were lost overboard.