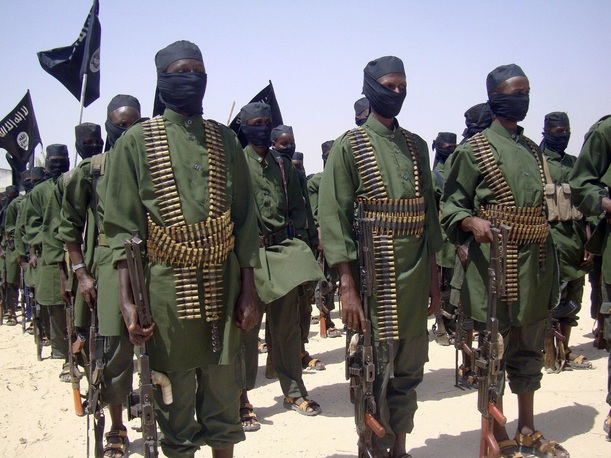 When we think of terrorist activities in Somalia we think of the pirates who are seizing commercial ships traveling the West African coast. But the pirates are just that; pirates. They appear to have no links with the Islamic extremists operating throughout the Somalian countryside. One of the more pronounced Islamic terror groups goes by the name Harakat al-Shabaab al-Mujahideen, or the common name: “al-Shabaab.”

The Arabic name is translated in English to mean “Mujahideen Youth Movement.” It is a radical group of Sufi believers that promote the Wahhabi version of Islam, imposing a strict version of Sharia law in areas under its control. This includes stoning to death women accused of adultery, amputating the hands of thieves, and beheading Christians and displaying their corpses alongside Bibles.

Al Shabaab has its main base in Somalia but has spread its attacks into Kenya and Yemen. In recent years the group has formed links with al-Qaeda and Boko Haram in Nigeria.

Ironically, al-Shabaab is believed to have forced the Somalian pirates to sometimes share the ransom money paid by shipping companies to recover pirated vessels and their crews.

As late as 2011, when the group controlled the City of Mogadishu, al-Shabaab campaigned for new members via its own propaganda television station and used music to attract youthful followers. It still operates its own radio station. It was noted that in 2010 about eight of every 10 soldiers in Somalia’s rebel forces were children.

While presently driven out of the major cities by the Somalian military, al-Shabaab militants still control rural areas, especially in southern Somalia.

Al-Shabaab has suffered a major set-back since the Somali government launched Operation Indian Ocean in 2014 to clean up insurgent-held pockets throughout the country. Also a U.S. drone strike killed al-Shabaab leader Moktar Ali Zubeyr. There has been a fragmentation of the organization that government leaders hope will lead to its eventual dissolution.

But Islamic terrorist organizations seem to have a way of springing up from the ruins of earlier organizations, with the fragments branching off into numerous new groups with slightly different ideologies.

For example, al-Shabaab was an off-shoot of the old Islamic Courts Union (ICU) which was broken up by Somalia’s Transitional Federal Government and its Ethiopian military allies. From that defeat evolved several new terrorist factions that rose up like the mythological Phoenix in Greek literature.

And like the hundreds of divisions within Christianity, numerous ideological rifts developed within the very leadership of al-Shabaab in its early days, and several of its senior commanders were assassinated. And while the members were Sufi in their general Islamic beliefs, because of Wahhabi roots, the organization was hostile to Sufi traditions. We have not been able to identify the issues and for purposes of this report, it probably doesn’t matter.

The question today is whether al-Shabaab will rise again, or if it has been split into several new factions that will evolve into three or more new Islamic-styled terrorist organizations ravaging the West African coastal neighborhoods.