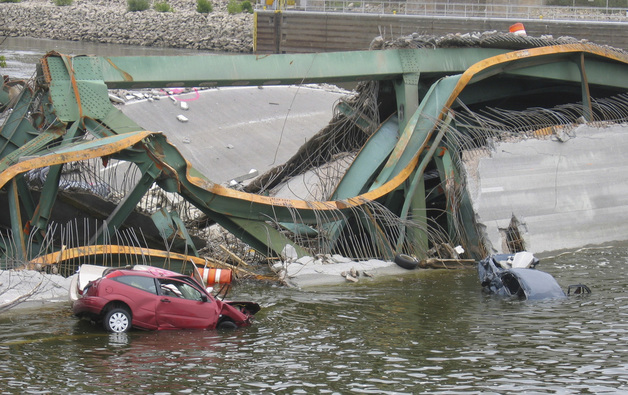 There is a growing concern about the screaming need to repair and rebuild the nation’s aging and outdated roads, bridges, water and sewer systems, gas distribution lines and electric grid, but the voices are coming from outside the houses of Congress and Senate. The current majority of elected legislators, head-bent on slashing federal spending and cutting income taxes while maintaining a 14-year-old war in Afghanistan, clearly do not have their eyes on the important problems about to explode in their faces on the home front.

When President Barack Obama took office in 2008 he began a campaign for a major spending bill to pour federal dollars into a national recovery program because of the severe financial recession and unemployment conditions he inherited. After a year of wrangling, the House and Senate finally sent a $787 billion Recovery and Reinvestment Act to Obama's office for his signature. It was not enough to meet the demands of the nation, and only a fraction of this money, $47 billion, was earmarked for infrastructure. The rest went to education, health and development of green energy. Only $27 billion was set aside for highway and bridge construction and $6.4 billion went for community water system projects.
​
There was nothing in that stimulous package for rebuilding the nation's crumbling electric grid, repairing dams, replacing old and erupting natural gas lines, maintaining the aging satellite communication systems, and very little for building high speed rail transit systems or building vast solar electric systems to replace the aging and toxic coal-fired electric generating plants.

A lot of communities put the money they received to good use. For a year or two we saw a flurry of construction work as highways were repaired, aging community water and sewer systems were replaced and a few bridges were built. For a while there was a call for workers to complete these construction jobs. But the money doled out by the government was not enough. It did not come close to meeting the needs of a nation struggling with worn out roads, bridges, electric services and crumbling dams.

This election year, Democratic Presidential Candidate Bernie Sanders is again calling for a major effort to restore the nation's infrastructure. He wants to reduce the money spent on the military and to raise taxes on the wealthy. Sanders has a big following but he is lacking media and big corporate support and consequently running neck-and-neck against Hillary Clinton. The Republican front-runner, Donald Trump, is basically unopposed. Neither Clinton or Trump are expected to put high priority on infrastructure.

What is desperately needed in America is a complete rebuilding of the nation's railroads to provide high-speed public transit between major cities, a serious rebuilding of the highway system, complete with alternative energy fueling systems to accommodate a new green energy style of vehicle, the complete rebuilding of the electrical grid system to make it secure against violent weather, terrorist attack and massive blackouts, development of new space vehicles to service and replace the satellite communication systems now in place, rebuilding and repair of thousands of old bridges and dams before they collapse, and a national plan for protecting and maintaining the remaining known fresh water sources and to prevent further pollution by agricultural and industrial carelessness.

There is a demand here for a restoration of the nation's strong anti-pollution laws, and a decision to put the teeth back into the U. S. Environmental Protection Agency. In fact, we need to make the laws even stronger. There is a crying need for America to become a world leader in a global movement designed to eliminate carbon and methane emissions, stop the advance of runaway global warming and the growing threat of our changing climates.

These are critical issues facing America. But how many politicians running for elected office do we hear talking about them? The issues are financial, the call to maintain the Bush tax cuts, the magical creation of jobs, and coupled with this, cuts in federal spending to erase a $16 trillion deficit. And oh yes, the politicians agree that the military must be maintained at all cost so we can be protected from the vague threat of terrorism and nuclear attack.
​
Oh yes, Mr. Sprat. The unwillingness by our so-called "leaders" to consider rebuilding the nation's infrastructure and making major changes in the way we do business is a really serious concern, not just for you, but for all of us.