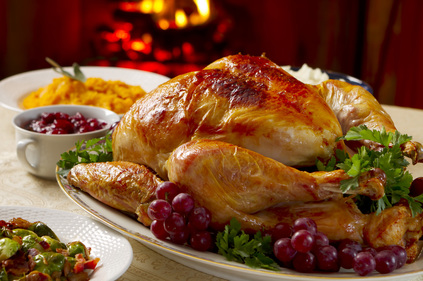 Enjoy The Turkey – Melamine For All!

An alarming number of Americans are showing up on food lines and may be celebrating this Thanksgiving holiday in a homeless state this season. Those who are wolfing down their traditional Turkey with all of the trimming may be shocked to know that they may also be swallowing a slow and insidious poison called melamine.

You may remember melamine. It is the stuff that got in the baby food in China and was the cause of several infant deaths and thousands of infants getting seriously sick. It also has been found in the dry milk products coming from China, and has showed up in some of the world’s chocolates.

The Associated Press once reported that it used the Freedom of Information Act to acquire a report from the Food and Drug Administration that traces of melamine have been found in infant formula produced by three major firms, Abbott Laboratories, Nestle and Mead Johnson. These firms produce over 90 percent of all of the infant formula generated in the nation.

The FDA also maintained that the trace levels of melamine are believed to be too low to cause any harm and that mothers should continue feeding it to their babies.
So how did the melamine get into the baby formula?

Melamine is a synthesized industrial chemical made from petroleum. It is used in plastics, including plastic food packaging and baby bottles. It also is a common ingredient in cleaners, waterproof plywood, plastic compounds, cement, ink and fire-retardant paint. It can leach off into food that comes in contact with plastic.

Melamine also is used in fertilizer because it helps nitrogen seep into soil. It accumulates in the ground as salt crystals that are later consumed by plants, including wheat, corn, beans, rice and all of the food crops that come to our table.  It has been found in animal feed which comes from corn, wheat gluten and other products, thus is showing up in meat, milk, eggs and all of the foods that come from our farms.

The horror of this story is that melamine has nearly the same protein structure as casseinate, the natural food protein found in milk. It is much cheaper to produce than casseinate so some food producers in China (and the United States?) discovered they could switch melamine for the milk base and for a while they got away with it. Until babies consuming the formulas laced with melamine began getting sick and dying of kidney failure.

Melamine contains a high level of nitrates and if people consume enough of it in processed meats, milk and other products, the nitrates crystallize in the kidneys causing kidney stones and even death.

Government officials say the amount of melamine found in the baby formula does not suggest it was purposefully added, as happened in China. They also say that since there have been no reports of human illness in the United States from melamine, they are not suspicious of other food products.

Does this mean we are not consuming melamine-laced food, or does it mean that the melamine we are eating has not caught up with us yet?

McWilliams wrote that the FDA last year reported that millions of Americans ate chicken and hogs fed melamine-tainted wheat gluten and feed imported from China. A recall was considered but it didn’t happen, probably for financial reasons.

This occurred at about the same time thousands of cats and dogs in the U.S. died from melamine-laced pet food, the McWilliams story stated.

Why were pets and babies in China victims of melamine, while adults have not yet shown symptoms of kidney trouble? The answer should be obvious. Babies and our cats and dogs are smaller, and more vulnerable to smaller doses of this poison.
​
The FDA admits it has not been able to establish an acceptable level of melamine exposure for children. Infant formula often constitutes a newborn’s entire diet for the first few weeks of their lives. The food we feed our pets often fits the same description. If they get canned pet food, the diet may remain unchanged for most of their lives.