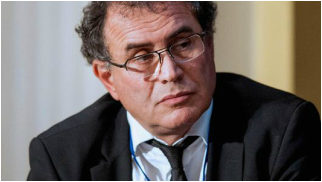 Roubini stunned a gathering of economists attending the International Monetary Fund on September 7, 2006. Unfortunately, few in that crowd took him seriously.

Since then, however, Roubini has been dubbed “Dr. Doom” and he is now a major voice in economic circles. He was the seer who saw it coming when no one else did. Consequently, he is being invited to speak to economic groups all over the world and his word is being taken seriously.

So what does Roubini see for the future? He says the “bailouts” designed to save the banking systems from going into total collapse have added “hundreds of billions of dollars to an already gargantuan federal debt and someone, somewhere, is going to have to finance that debt, along with all the other debt accumulated by consumers and corporations.”

He warns that the United States has turned to China, Russia and the Middle Eastern states to borrow the money needed to keep things afloat. But “these are rivals, not allies.”
Consequently, Roubini warns, he believes the United States will eventually emerge from the crisis “a different nation with a different place in the world. This might be the beginning of the end of the American empire,” he said.

Since the 2008 crash, world investors have been spooked by what Roubini calls “severe market Illiquidity. There was the May 2010 “Flash Crash” that sent the Dow plummeting almost 1,000 points in about half an hour. Then the “taper tantrum” happened in spring 2013 when bond yields flew off the charts for a few days. Then another flash crash happened last fall.

Roubini warns that an increase in investors and the willingness of the Federal Reserve to continue printing new money to help cover the massive debt is creating a “liquidity time bomb” that he fears will “trigger a bust and a collapse.”

Liquidity is a system designed to allow investors to quickly sell stock when panic strikes. Ironically, when steps are taken to shut down markets to prevent panic selling, investor panic only increases.

Roubini supported the Federal Reserve decision to cut interest rates at 2 percent and engineer a takeover of Bear Stearns. He says he believes these actions averted a financial catastrophe.

He now is urging the bailouts of mortgage owners, especially the banks holding over a trillion dollars in high-risk mortgages. If this doesn’t happen, Roubini warns that the banks will be going under. “You either nationalize the banks or you nationalize the mortgages. Otherwise, they’re all toast.”

In a recent interview with Stephen Mihm, assistant professor of economic history at University of Georgia, Roubini said he believes the United States “will likely muddle through the crisis it will emerge from it a different nation, with a different place in the world.”