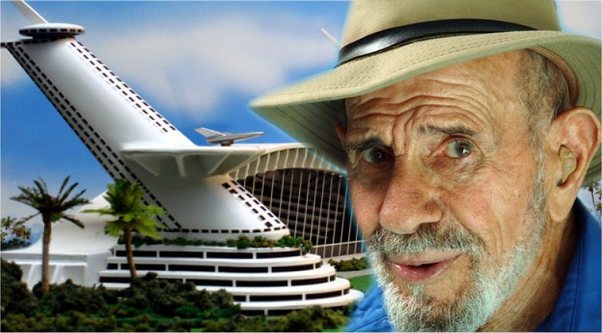 The Fresco Solution For Saving The World

Those who have heard his lectures or read about him know that the late Jacque Fresco was among the great thinkers of the modern world. He died last week at the age of 101. During his life Fresco experienced two world wars, the Great Depression, and the shift from a family/farm-oriented society to the industrial/electronic/capitalistic wilderness we struggle with today. A self-taught industrial and architectural designer, social and structural engineer, Fresco invented numerous devices for industrial and medical use, and he designed a futuristic plan to meet the world’s social needs in what he called The Venus Project. That project is still alive and worth considering as a solution to our problems of overpopulation, climate change and an alternative to the failing world systems of government.

A self-taught industrial and architectural designer, social and structural engineer, Fresco has invented numerous devices for industrial and medical use, and he has designed a futuristic plan to meet the world’s social needs in what he has called The Venus Project, located in Florida. He promotes what he calls a resource-based economy and has coined the name “sociocyberneering” to best describe the overall scope of his work.

Fresco has written books and lectured to promote his ideas, but while he has succeeded in being recognized, he has been quietly blocked from selling the world on his futuristic cities, high-speed one-rail trains, aircraft, land vehicles and ships because everything is based on a complete restructuring of the way we live. And most critical of all, the Fresco plan eliminates the need for money and the capitalistic system.

Various video documentaries detailing Fresco’s work and his Venus Project are available for anyone wishing to know more about this amazing inventor and the way he views the world. We highly recommend William Gazecki’s Future By Design generally available wherever video rentals can be found.

In this video, Fresco describes the concept of a resource-based economy and the value of using world resources to build cities where computers and machines do the repetitious physical labor, everything humans need is provided, and no one needs to work for money. Fresco argues that money was an invention designed to help enslave the majority of humans and force them to labor for their meager share of the world’s wealth.

The Fresco cities are built in circles, with a master computer in the heart, surrounded by schools and universities, and this surrounded by plazas where goods and services can be found, then agricultural areas, and residential neighborhoods beyond that. The homes are custom designed to fit individual life styles.

Everything in Fresco’s world is designed to self-replicate and repair in the event of accidental damage. Vessels at sea and high speed trains are designed with sections that can be lifted from the whole, with people and cargo unloaded. They are replaced by new sections thus speeding the trains and ships on their way.

There is no waste in this proposed world. Everything is recycled. In fact, every city has its own recycling system with utility pipes, wires and other services placed in the ground before the buildings are put in place.

In his lectures Fresco describes humanity as still in its primitive state. He says we use the words “civilized” and “civilization,” but that we cannot advance beyond primitive until we can stop going to war, bring an end to human suffering, and learn to respect and care for the planet.

He said that religions teach us that we need not worry about suffering in this world because we will go to a perfect world after we die and reach “Heaven.” But he said this is the wrong way to be thinking. If we pool our resources and agree to share and utilize all that the Earth has to offer in the most efficient way possible, we can all enjoy this perfect world right here.

If and when humanity learns to live in harmony, it might be possible for us to think in terms of building the world envisioned by Fresco.