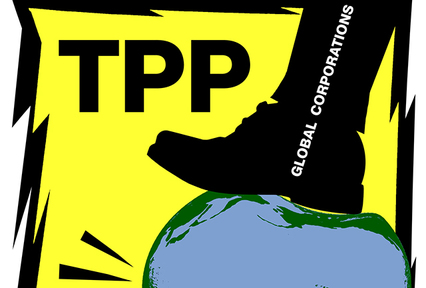 It was probably inevitable that our ever-shrinking world would drift into the global partnership long described by the prophets of old as a "one world government." This emerging global enterprise is not like anything we ever imagined, however. That’s because it is being designed by the people now in financial and political power who are primarily interested in creating a corporate plan to seize even more of the planet’s resources, latch onto the world’s wealth and further enslave the masses.

The idea, drafted secretly behind closed doors, is unveiling under the name Trans-Pacific Partnership, or TPP. This is a proposed trade pack that the United States negotiated with Japan, Australia, Brunei, Canada, Chile, Malaysia, Mexico, New Zealand, Peru, Singapore and Vietnam.

If approved and instituted, TPP will be the largest trade deal ever made. It will involve nations stretching from Japan across the Americas, represent 792 million people accounting for 40 percent of the world economy.

The idea is to expand the World Trade Organization to virtually include all of the major industrialized nations bordering the Pacific Rim. Organizers want liberalization of economies through the abolition of tariffs on trade. The United States, which joined the talks in 2008, is promoting a hard-core free trade policy.

What is frightening about the agreement is that it has been secretly hammered out by the big banks, big corporate giants and government leaders with their hands on the money. The talks have been going on for years, and all behind closed doors. The general public is only now beginning to learn about TPP, and what we are being told is not anything we think will be good for the people. We see it as a Trojan Horse.

If the TPP gets international ratification and becomes a reality, the effect on the general population may make us all feel as if someone clamped chains around our necks. The freedoms we have enjoyed as corporate workers, members of a democratic society governed by elected officers, world communicators via the World Wide Web, and shoppers able to choose the products we eat and use based upon the belief that they are safe, will be snatched away from us.

At last report the TPP could allow for millions more American jobs to be lost to offshore employers, free corporate "banksters" from government oversight, ban the "buy American" promotions designed to help create green jobs and rebuild the U.S. economy, control our access to medicine, flood our grocery stores with unsafe food and products, and allow corporations to actually avoid American environmental laws and safeguards for public health.

The agreement goes beyond affecting trade issues. Among the other issues are:

--It gives foreign corporations the right to override domestic U.S. laws governing trade and non-trade issues and actually sue governments in international tribunals to overrule national sovereignty. This could include things like environmental regulations on air, ground and water pollution, fracking for natural gas, offshore oil well drilling and control of nuclear energy.

--FPP would lift regulations on banks, power companies, insurance companies and stock market trading making it easier for corrupt banksters to swindle the people out of their hard-earned money.

--It would lower food safety inspections, prohibit mandatory labeling of genetically modified products and even the prohibition of the butchering and sale of meat from livestock stricken with serious disease.

--Through government procurement it would block people from buying locally produced farm products or possibly even growing their own food.

--It would allow for an international policing and monitoring of Internet user activities.

--There would be a regulation on public welfare, a halt to workplace safety standards and allow corporations to move more domestic jobs overseas.

--The agreement would increase patent and copyright protection, thus eliminating the freedom of Internet writers to quote from published documents and eliminating generic medicines that can be bought at affordable prices.

--There even is a potential restriction on essential services like public access to water, gas and electric services because of new investment rules.

These are but a few of the possible impacts TPP may bring if adopted by our elected representatives in Washington. And the action, which has been in planning now for several years, has long been withheld from public attention by our corporate owned media.

Now that the word is out, however, there has been a public outcry against TPP. The Washington Post recently reported that a "coalition of more than 1,500 interest groups" sent a letter to Congress demanding that lawmakers block the proposed trade pact. Labor unions, environmental groups, consumer advocates and even religious groups have joined in the protest. Candidates Bernie Sanders, Hillary Clinton, Ted Cruz and Donald Trump have all spoken out against it.

Suprisingly, President Barack Obama and members of his administration are in support of the agreement. A lot of "sold-out" members of Congress and the U.S. Senate may also support TPP, but the issue is a hot potato during this heated election year.

The time for nations to stand up for ratification is fast approaching. A formal "signing ceremony" is planned for today (Feb. 4, 2016) in Auckland, New Zealand. Representatives from all participating countries are expected to participate. But the ceremony will not bind the nations into participation. For the U.S. that clock starts when President Obama submits authorizing legislation to Congress. Before he does this, the International Trade Commission must make a report on the TPP's economic impact. This report is expected to be made public on May 18.

So what can we expect to happen in Washington this year? It may have a lot to do with the way this year's campaign swings during the primary elections leading up to the November presidential vote.

Some analysts suspect that the TPP vote will occur during a "lame duck" session right after the elections. At that time members who are retiring or been kicked out of office will still have voting power until the end of their terms. With nobody holding them accountable, they may be voting to "repay their contributors." Those re-elected will cast their votes knowing that they have four years before they seek another term. That is lots of time for the public to forget what they did in 2016.

Once instituted, it will be another two years before the public can do anything about it.
​
If it can't be stopped TPP may be poised to change our lives forever, and do it with no less than an iron fist.