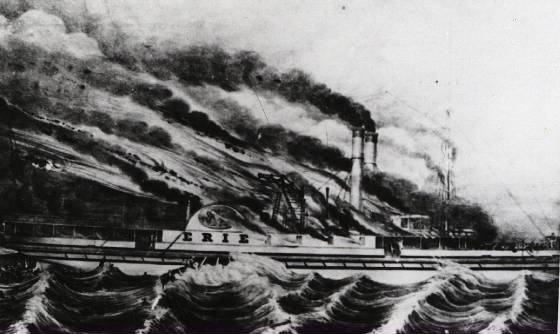 A few years ago the UFO hunters were citing strange lights over Lake Erie as proof of new sightings of alien ships in our skies. A report in in one of the web sites recalls clippings from area newspapers dating back to the mid-1800's where people along the shore saw unexplained lights and thought they were from burning ships.

As an avid Great Lakes historical researcher, those same clippings did not go unnoticed by this writer. The following piece, drawn from the text of one of my yet unpublished books, is how I perceived these reports and the conclusions I reached. My findings were based more on supernatural thought than they were on the probability of alien craft, since the lights looked like fire and they were close to the waterline.

In November, 1867, an unnamed correspondent to the Erie Dispatch, Erie, Pennsylvania, wrote about a peculiar phenomenon observed regularly on Lake Erie. The writer said that every autumn, sailors and residents on the Pennsylvania coast saw lights on the water that made them think they were watching a burning ship. When they investigated, they found it was only a mirage.

The writer said the light was seen from his home near Erie at about 7 p.m. on Tuesday, October 29. There was a strong wind blowing but he realized that the glowing image he was watching was not being blown across the lake by the wind. "I at once concluded that it was nothing more than the mysterious light which for many years past . . . has been seen by the inhabitants at this point on the lake shore. The light has made its appearance generally, if not always, in the fall of the year, and usually in the month of November." He said it usually was observed following a strong blow from the southwest.

The writer said he knew what it was like to watch a burning ship at sea because he witnessed the tragic fire in 1841 that destroyed the steamer Erie and claimed two hundred and fifty lives off Silver Creek, about fifty miles east of Erie.

After this event, passing sailors told of seeing the bright glow of a burning ship in that area but nothing could be found. Were they watching a ghostly apparition of the steamer, Erie, returning each year to reenact one of the worst horrors in the history of the lake?

If it was a ghost ship, it may not have been the Erie. There were few similarities between that tragedy and the light people were observing at Erie. The Erie burned in calm weather on August 9, after an explosion and flash fire fed by a cargo of turpentine. The fire started at 4 p.m., in broad daylight, although it is possible that the ship was still burning and the flames were still seen on shore after the sun went down. The Erie sank about four miles off shore.

The only other major fire with loss of life on a steamboat in the area involved the George Washington. This ship also burned near Silver Creek on June 16, 1838. Thirty people perished in the 2 a.m. blaze.

Of all the sightings, the writer said the most spectacular occurred on the night of November 24, 1852. "The resemblance which this light bore to that of the burning steamer (Erie) was so strong that I confidently expected the arrival of boats from the wreck during the night. Others with myself watched the light for perhaps two hours, and with the aid of a good night glass obtained what seemed to be a very distinct view of the burning vessel. The object appeared to be some two hundred or more feet in length . . . and about as high above the water as an upper cabin steamer.

"At times the flame would start up in spires or sheets of light, then away from side to side and then die away, precisely as would be the case with a large fire exposed to a strong wind, and two or three times there was the appearance of a cloud of sparks, as if some portion of the upper works had fallen into the burning mass below. The sky and water were beautifully irradiated by the light during its greatest brilliancy. The light gradually subsided, with occasional flashes until it disappeared altogether."

The phenomenon of mystery visions of burning ships is not limited to Lake Erie. A similar sighting was reported on Lake Michigan.

On July 23, 1884, many people at Milwaukee, Wisconsin, stood on the shore watching what they thought was a terrible disaster at sea. Between 11 p.m. and midnight they said there came to them the distinct vision of a burning ship on the eastern horizon. They said at intervals a light would flash and bound up toward the heavens, then fall in a great circle.
​
Occasionally they said they even heard a dim sound as if there were an explosion. By midnight the light died down and was seen no more. No ships were lost that night and the light could not be explained.