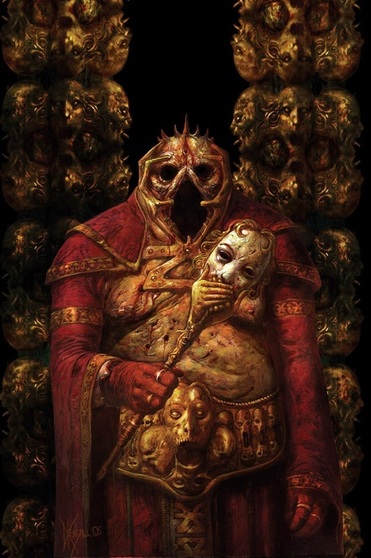 Art Concept
Living Under The Spell Of The Archons

An ancient 2,000-year-old document known as the Nag Hammadi was uncovered in clay jars in Egypt in 1947 that unlocked a story of an alien invasion of Earth that occurred about 3,600 BC.

The Nag Hammadi texts, carefully hidden by the Gnostics at about the time Jesus walked the planet, called these alien beings Archons. They were described as entities that existed in a parallel world behind a veil created by trickery of the human mind. Some looked like reptiles, others like an unformed babies with grey skin and black, unmoving eyes.
​
The invasion by the Archons was unlike any assault by enemy forces ever experienced by humanity. Author Jay Weidner, known for his research into the paranormal, said this invasion "was like a virus" that swept the world, invisible and without human awareness. Once here, the Archons had the ability to create a false reality which kept them cleverly hidden in our midst as they destroyed our freedoms and turned humans into an enslaved society.

The reason the Nag Hammadi text is so important, Weidner explains, is because it is the only surviving document that explains the invasion by this alien force. All of the other books and records, once stored at the great Library at Alexandra, were destroyed when the library was burned by the Romans. Weidner said he believes the power figures spent 1,300 years carefully destroying all references to their arrival and making sure it was erased from human consciousness.

Finnish journalist Usko Ahonen, described in his profile as an "insider on alien intelligences." He has offered a theory that the Archons may not be alien invaders but instead are a corrupted spin-off of Sophia (the Mother Earth) at the time of creation. He writes that the very word Archon means "primordial" and "ruler" who exist "in contrast to the Aeons."

Whatever their origin, the very presence of Archons in our midst is theoretically blamed for the constant inability by humanity to advance spiritually into the supreme beings we were meant to be. Instead, we have been thrown into a false reality of enslavement under a society bent on greed and materialism, and belief systems established by false world religious systems that teach us of a sinful state that can only be corrected by submission to a false "god" that oversees our every thought and act.

Author John Lash suggests that the so-called aliens many humans perceive as Grays when there has been contact are actually Archons that were accidentally seen by people who briefly opened their third eye and caught a glimpse of the world they occupy beyond the veil.

He describes the Archon as "inter-dimensional inorganic beings who rule and reign over matter. This makes them look godlike to humans, but they are incomplete entities since they lack human consciousness and experience . . . They are psychic parasites capable of mind control on many levels."

Lash notes that "The Archons can’t inhabit earth, which is hostile to them. Archons are caught in a delusion that they created humans. They have no soul, only a hive-like common mind."

What the Archons can do, however, is enter people’s bodies, manipulate their actions, and even completely take over the body to carry out mischief among the humans. Weidner states that "they are responsible for the deterioration of culture. . . As the Archonic presence has spread across the earth and has escalated in the Twentieth Century, you can see that they are responsible for sprawl and the mass ugliness that is everywhere."

Lash wrote that the Archons feed on negative emotions like fear and worry, so their actions are designed to keep humanity in a constant state of disruption and unrest.

Dr. Carlos Castaneda, who worked with the Yaqui Indians to achieve an altered state of consciousness, told how, to his horror, he discovered how the human mind has been infiltrated by this alien intelligence. He wrote: "We have a predator that came from the depths of the cosmos and took over the rule of our lives. Human beings are its prisoners. The predator is our lord and master. It has rendered us docile and helpless. If we want to protest, it suppresses our protest. If we want to act independently, it demands that we don’t do so."

There are theories that the human contacts with alien entities, usually always described as small humanoids with large heads, big black eyes and grey bodies, are visions of the Archons. Such sightings have been occurring for thousands of years. Rock carvings left by the ancients often depict these beings strongly suggesting their influence on humanity even when we were cave dwellers.

Ahonen wrote that some believe the Archons may even have a predatory interest in our souls since they do not possess them. The late Dr. Karla Turner, author of Into The Fringe, believed she was an abductee. She concluded that the aliens, or Archons, have the ability to take our consciousness from our physical bodies, disable our control of our bodies, replace us with one of their own, and use the body as vehicles for their own purposes before returning our consciousness.

Turner perceived these entities as deceitful and cruel.

Conspiracy buff Jeff Rense, in a radio conversation with Weidner, suggested that many humans in positions of power are being invaded by Archons in what has become a blatant attempt to bring mass pain, suffering and death to people all over the world. "There is a blood lust, a very dark and evil satanic blood lust and we are, apparently, well in the hands of these beings now. They have made their plans long ago and intensified them over the last two hundred years and they've pulled it off. They're doing it without any stealth now. They're pushing it in the faces of an even dumber and helpless American populous."

Weidner: "I really hate to say this but we have all been fooled. The whole idea that some kind of messiah is going to come to save us is an Archon trick to make you think you don't have to do anything about your present situation, no accountability."

He said the Archons have successfully convinced us of a complete reversal of reality. "They are always trying to convince you that war is peace, that love is hate. Everything is always backwards. Once you can see it, you are able to see that everything is being turned into a head-over-heels con trick where everything is reversed.

"I don't know how we get out of this except to talk about it. We have to start thinking about who is fooling us and why they are doing it - and study what the ancients had to say about all of it," Weidner said.

He said the best weapons to use against this dark energy are love, light and personal courage. "They cannot stand up to courage or a clear, articulate debate because their own premises are built entirely on falsity. It's all false and so we can begin deconstructing history by seeing through the lies.

"Anyone who is following this mad, insane god Jehovah will be lead to their death for certain. If you think there's a reward for you for serving the Archons, I assure you there is not," he said.
​
Weidner concluded that "solving the Archon problem may very well be the test. The final test of humanity is can you define the Archon problem and solve it? The thing that will solve the Archon dilemma more than anything is to love each other unconditionally. That just drives them out of their minds."