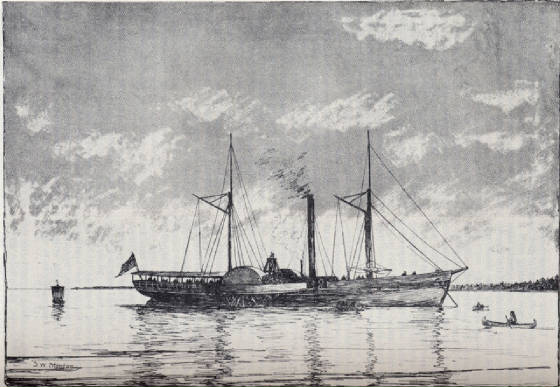 The first steamboat on the Great Lakes was the Walk-in-the-water, launched in 1818.

There is a legend that the boat got its name from an Indian that watched Robert Fulton's steamboat Clermont as it huffed and puffed its way up the Hudson River just 11 years earlier. As the vessel moved upstream against the river current without the help of sails and wind, and he watched the turning paddle wheels, the native remarked that the vessel "walked in the water."

While officially named the Walk-in-the-Water, the vessel was most commonly known to the people around the Great Lakes as "the steamboat." That was because it was the only operating steamboat during the three years of its existence.

The Walk-in-the-Water made an important mark on Great Lakes history.

Among the pioneer steamboats in the world, it was the first built on Lake Erie, the first to travel on Lakes Erie, St. Clair, Huron and Michigan, the first to offer passenger and freight service between Buffalo and Detroit, and the first steamer to wreck on Lake Erie.

The vessel was financed by a group of enterprising New York businessmen that envisioned steamboats as an important commercial shipping venture. They included engineer Noah Brown, who designed the craft, and Robert McQueen, a machinist who designed and built the engine.

After its launch in the spring of 1818, the Walk-in-the-Water became a conversation piece for all that saw it. A smoke-belching, wood-burning ship, it created a sensation where ever it went. The paddle wheels looked too large for the boats 138-foot-long hull. Its single smokestack towered above the wooden deck.

McQueen raised the stack high so the wood fires from under the boiler didn't have a chance to shoot hot embers back to the deck and set the wooden vessel ablaze.

The steamboat's first trip across Lake Erie to Detroit began on Aug. 25 with Captain Job Fish on the helm. It left Buffalo with general freight and 29 passengers bound for Erie, Grand River, Cleveland, Sandusky and Detroit. She reached Detroit 44 hours later.

It was said that the cabins of the Walk-in-the-Water were elegant. Passengers considered a trip from Detroit to Buffalo a very pleasant experience.

During the summer of 1819 the Walk-in-the-Water made a trip up the Detroit and St. Clair Rivers into Lakes Huron and Michigan. It carried a load of supplies for the American Fur Company at Green Bay, Wisconsin
.
There is a strange synchronicity here. As the first steamboat to enter these waters, the trip was identical to the one made by an earlier historic vessel, LaSalle's sailing ship Griffin. The Griffin was the first sailing ship to enter the Great Lakes above Niagara Falls. That happened in 1679.

The parallels between the two boats' histories get even stranger.

They were both built in the forests of New York at the eastern end of Lake Erie. They both were built for commercial reasons. They were the first of their kind to make the trip to Green Bay from the east end of Lake Erie, they both came to serve the fur industry, both boats stopped at Mackinac Island during their journey, and both were wrecked in storms.

The Griffin wrecked somewhere in Lake Huron on the way from Green Bay back to Lake Erie. The Walk-in-the-Water survived three years before it met its fate.

The steamboat was faithfully serving its regular route between Black Rock and Detroit when it wrecked in a storm on the night of Oct. 31, 1821.

She was under the command of Capt. Jebediah Rogers that night. The vessel had 18 passengers and general freight aboard and was on route to Cleveland. A violent gale blew from the southwest at about 8 p.m.

The passengers became alarmed as the ship's timbers creaked and groaned at every roll. Rogers found that the engine wasn't powerful enough to make progress against the storm and he was fearful of turning around and trying to get back to Black Rock in the dark.

He ordered the anchors dropped and tried to ride out the gale in mid-lake. One passenger, the wife of the Rev. Alanson W. Welton, said the ship was anchored a few miles above the old Buffalo lighthouse.

As the night went on, the storm increased in fury, the hull began to leak, and the anchors dragged. The Walk-in-the-Water drifted with the wind toward the Canadian shore. At about 5 a.m. the captain gave the order to cut the chains so the ship could drift ashore at Point Albino.

Mrs. Welton's account of the wreck that morning is graphic:

"Tired out with anxious watching, I had taken my berth with my children, keeping my own and their clothes on. My husband was still on deck. When the captain's summons came to the cabin passengers to turn out, as the boat was going ashore, the floor of the cabin was ankle deep with water.

"I will not attempt to describe the anxious, prayerful, tearful upturned faces that were grouped together in the cabin of the Walk-in-the-Water on that terrible, cold morning as we looked into each others faces for probably the last time."

But prayers were answered. The ship went aground near the lighthouse and the passengers and crew were all safely removed to the lighthouse within a few hours.

Before the storm was over the hull of the Walk-in-the-Water was cracked and the ship declared a total wreck. The engine was salvaged and used to power the boat's successor, the Superior.

The age of steam had arrived on the Great Lakes