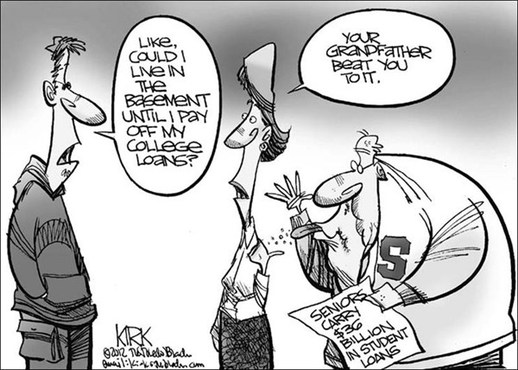 If you are among the estimated eight million Americans struggling to pay off outstanding college debt you should be very interested in two recent developments; the arrest of a Texas man by U.S. Marshals for non-payment of his debt and a call by Democratic Presidential Candidate Bernie Sanders to eliminate college debt altogether in the United States.

The issue of student loan debt has reached crisis levels in the United States. The problem is that federal legislation in 1998 turned the U.S. Department of Education into a predatory lender. By law student loan debt is the only kind of commercial deficit that cannot be it excused through bankruptcy. Also America’s collapsed job market since 1998 has made it impossible for many college graduates to find jobs that pay enough for them to earn a living and make student loan payments.

Remember that 1998 was the end of the malicious eight-years of the George W. Bush Administration when the nation went from having a cash balance to falling into debt counted in the trillions of dollars by the time President Barack Obama was sworn in. The nation has been reeling from the damage ever since.

Statistics show that outstanding student debt following 2015 graduations in the United States totaled $1.2 trillion. The average debt per borrower was calculated at $35,000 and rising.

By comparison the average student loan debt at graduation only a decade ago was a little more than $10,000. When this writer attended college in the late 1950's I earned enough in summer employment to cover the cost of my college tuition and textbooks. I earned enough working in the university food commons to cover the cost of off-campus housing and food. We ate oatmeal and beans, but I never accumulated debt while in college. Student debt was almost unheard of at that time.

High school graduates today are beginning to think that an undergraduate education with even two years of advanced training is not worth the financial cost. A four-year degree poses a financial gamble that many gifted young people are growing reluctant to take on.

Graduates now struggling with student loan debt are complaining that the excessive obligation affects major life plans like marriage, buying a home and having children. With college debt hanging over their heads, graduates find it difficult to acquire bank loans to even purchase cars or household appliances.

With fewer and fewer students thinking of college, the prospect of good wage earners in the future is dwindling. This in turn promises a boomerang effect on federal income tax revenues in a nation that is mired in its own financial liabilities.

To combat this looming disaster, Sanders offers a plan to make public colleges and universities tuition-free and to drastically reduce interest rates on student loan debt.
Another issue facing colleges is that there has been a reduction in government grants to these schools, so the cost of operating them is shifting to state governments and families. States, which are also feeling the pinch of reduced tax revenues, are also cutting assistance to colleges and universities. With more and more people out of work, and older Americans living on forced early retirement, the exorbitant costs of sending a child to college and picking up a bigger share of the debt become a major burden.

So what happens to former students who can’t pay their student loans and find bill collectors and federal marshals at their door?

By law it is illegal for people to go to jail for unpaid debt, but collection agencies are resorting to some harsh tactics to force payment. This was demonstrated in the case of Paul Aker of Houston, Texas. Federal marshals showed up at his door with a warrant, dragged him to Federal District Court, and forced him to sign a payment plan to cover his original $1,500 student loan plus an additional cost of $1,200 in interest and police services.

While debtors’ prisons are technically illegal in the United States, authorities are twisting laws to make people serve jail time for non-payment of their debts anyway.

Without someone like Sanders working to change the corrupted student loan program and make colleges and universities more affordable to America’s youth, we could see unemployed college graduates sitting in U.S. jail cells alongside the thousands of marijuana users.

To be fair, Democratic opponent Hillary Clinton also is offering a program designed to east student loan debt, but it is not as complete and dramatic as the Sanders plan. She proposes increased federal grants to colleges and universities so tuition costs can be reduced.

The bottom line to this story: federal student loans are the only form of consumer debt that cannot be relieved through bankruptcy. The government can garnishee wages and seize federal tax returns until the debt and the interest on it is paid. Interest rates range from about 4 to 7 percent, depending on how and when the loan was acquired. We personally know of 40-year-old graduates still struggling under the burden of unpaid student loan debt and the accrued interest that nearly doubles the amount of the original loan.
​
The insanity in America is running rabid!