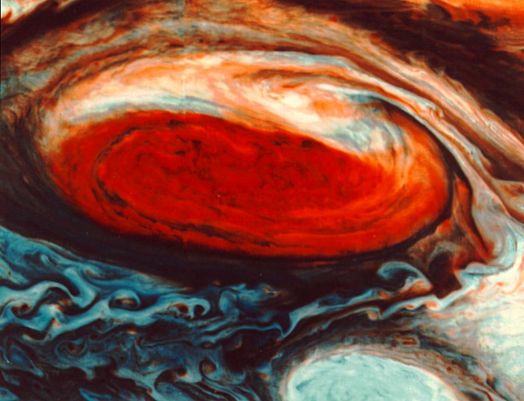 Perhaps it was the Galileo spacecraft that we sent to study Jupiter close-up in 1989, or the Cassini spacecraft that followed a decade later, or perhaps it has been our ability to use the Hubble telescope to study that gas giant with greater scrutiny. Whatever the reason, astronomers have a sense that the giant storms that ravage that planet’s swirling surface are occurring with more and more frequency.

Maybe it is because we are looking that we notice so much activity. Whatever the reason, our friend Jack Sprat lists the increasing number of storms on Jupiter among his list of 57 issues of concern. Does he have just cause?

The data sent back from the two space probes gave researchers detailed information about the strange weather occurring on Jupiter, and determined that the planet is one very stormy place. In fact the storms on Jupiter can be larger than the size of the Earth, and they can last for centuries. The storms swallow each other, gaining new energy from one another as this occurs. The smaller storms seem to pull their energy from the lower depths of the planet.

While scientists were making all of these observations, and Jupiter was being examined more closely than possibly ever before in history, they had the amazing opportunity in July, 1994, to observe the comet Shoemaker-Levy 9 break up into fragments and all of them crash into the southern hemisphere of the planet. While there wasn’t a solid rock surface to strike, the comet parts left distinct impressions on the surface of Jupiter as they disappeared into the gaseous material. What role did the comet play in events now occurring on that planet?

By 2006 astronomers at University of California, Berkeley, and the W. M. Keck Observatory in Hawaii, were in general agreement that they were seeing increased turbulence and storms on Jupiter’s surface. The storms continued to rage ever since in what has been dubbed a "major upheaval" of storms, including the emergence of a second Red Spot near the Great Red Spot. This has been dubbed the Red Spot Jr.

The conclusion has been that Jupiter appears to be going through a major climate change at the same time it is happening on Earth. The research teams apparently have not tried to determine the source of this change in activity on Jupiter.

Philip S. Marcus, a professor of fluid dynamics at Berkeley, said the analysis of the Hubble and Keck images appears to support his belief that Jupiter is in the midst of a global warming, with temperatures altering as much as 10 degrees Celsius. He believes Jupiter is getting warmer at the equator and cooler at the South Pole. This change is causing instability of the jet streams and spawning new vortices.

"The appearance of the planet’s cloud system from just north of the equator down to 34 degrees south latitude keeps surprising us with changes and, in particular, with new cloud features that haven’t been previously observed," Marcus said in a story for Science Daily. "Whether or not Jupiter’s climate has changed due to a predicted warming, the cloud activity over the last two and a half years shows dramatically that something unusual has happened."

So it appears that some noted astronomers are in agreement that Jupiter is fraught with an increase in storm activity and possible climate change. Is there a parallel to be drawn here with the things that are going on with our own planet? And if the planets are all sentient beings, and in communication with one another, are climate changes happening all through our solar system?

Mr. Sprat has drawn our attention to something very interesting going on in space. But should we be concerned?