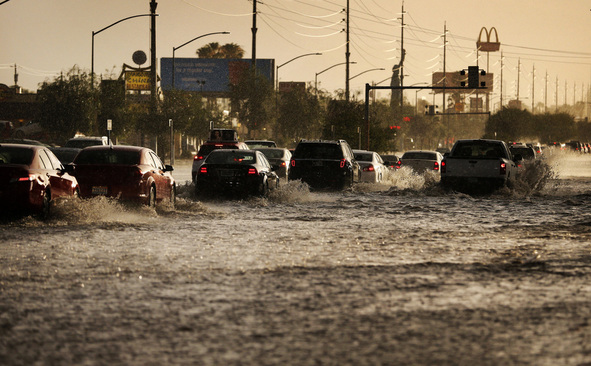 Floods have been a natural phenomenon all over the world, especially for people living on river deltas and on waterfronts that are occasionally struck by tropical storms, hurricanes and monsoons. But something new appears to be happening that is only recently beginning to appear in daily news snippets.

The world is no longer experiencing those gentle all-day rains that soak the ground, bring moisture to the plant roots, and help maintain a natural balance in weather patterns. When the rains come they are coming with thunder and high winds. And the storms are dumping the water in such quantity and speed they are creating flash floods that sometimes wash away land and homes, wash out bridges, drown people and animals, and cause billions of dollars in damage.

The television weather reporters are telling us almost daily of storms that are dumping up to four and six inches of rain in specific areas within less than an hour. Downpours like that were once almost unheard of.

Much of Texas was deluged in the fall of 2015 by pounding, relentless rains -- up to 20 inches, in some locales -- causing dangerous flooding that washed away cars, a train and people.

There was so much rain in a single storm that flooded South Carolina that same period, it caused 11 dams to fail.

New York City was hit by a four-inch deluge that not only flooded streets but flooded subway tunnels. City storm sewers were never designed to handle this much water in so short a time.

A storm in August dropped 13.26 inches of rain on Long Island in just nine hours. Similar flooding rains pounded the land from New York west to Michigan and south to Texas. The National Climage Assessment (NCA) said these types of heavy downpours have been increasing over the last five decades and getting worse with each passing season. The report noted that heavy rain events in the Northeast United States have increased by 71 percent since 1958.

And major flooding appears to be on the increase all over the world. A map prepared by the Humanitarian Early Warning Service (hewsweb.org) defines a total of 40 major world floods just in June, July and August of 2012. A Drowning World exhibition in London pictures scenes of flooding devastation from around the world and provides data on how climate change may be involved.

Bob Ward, communications director at the Grantham Research Institute on Climate Change and the Environment, London, wrote that it remains unclear what extent that climate change is contributing to the intensity of these floods. "A single extreme weather event cannot be definitely attributed to climate change, the influence of which can only be detected and measured through the analysis of statistical trends looking back over many decades. That means we will not be certain for many years to come about how flood risk is being affected."

Ward noted, however, that an analysis of UK weather trends between 1961 and 2006 "during which the average temperature increased about one centigrade degree, indicated that although our winters have not been significantly wetter, the number and severity of heavy rainfall events has increased."

Ward wrote this in 2007. We wonder what he is saying this year.

Our own research shows that the occurrence of severe and destructive rainstorms has been on the rise since 2007. In April, 2010, for example, Rio de Janeiro was hit by almost a half a foot of water in 24 hours. The heavy rains flooded the city and caused mudslides that killed 175 people and left an estimated 15,000 homeless. Another storm just like it ravaged several cities just north of Rio de Janeiro killing 1,000 people less than a year later.

Also in 2010, the heaviest monsoon rains ever recorded in Pakistan caused rivers to flood, swept thousands of villages, killed 1,500 and left 14 million homeless. That same summer China experienced its worst floods in decades. Floods and landslides in the northwest province of Gansu killed more than 1,100 people and other 600 were lost when swept away in mudslides.

While it has been hard to find statistical reports, we are hearing stories of even more extreme deluges in Bangladesh, the Philippines, Paraguay, Russia, China, Korea and Japan. The central United States has been hit by a new kind of severe wind and rain storm called a derecho. This involves hurricane force winds, thunder and lightning, hail and a flooding deluge of rainfall.

A story in Scientific American in 2011 noted that the severe winter storms, heat waves and heavy deluges of storms expected to happen once every 100 years even then had climate scientists sitting up- and taking notice. Instead of their cautious wait and see approach, the researchers at the National Climatic Data Center at Asheville, N. C., were saying they saw climate change as the cause of the extreme weather.
​
So yes, Mr. Jack Sprat, where there isn’t extreme drought in the world, the heavy rainstorms are bringing floods. The world’s weather is completely out of balance and the culprit appears to be the warming of the planet.