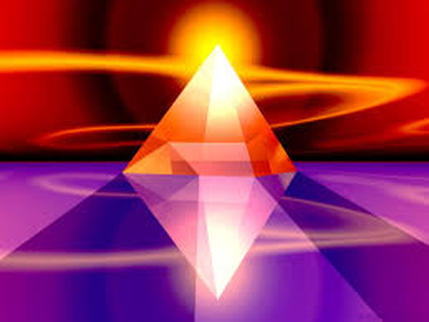 We noticed a blog page posted sometime in 2008 asking the whereabouts of Dr. Ray Brown of Mesa, Arizona. The anonymous writer said: “He supposedly found the Atlantis crystal and that’s all anyone knows. There is a lot of people trying to find him.”

Indeed, there has been a strange story floating around the web about a Dr. Brown from Mesa who got separated while he was scuba diving with friends near the Bahamas in 1970, and accidentally came upon the top of a large pyramid projecting from the shifting sands on the sea floor.

As the story goes, Brown found an entrance and swam inside the pyramid where he found brightly lit rooms and beautifully cut crystals and other stones. He found a plate on which rested a pair of carved metal bronze-colored life-sized hands holding a crystal sphere three and a half inches in diameter.

Brown allegedly took the crystal, swam back out of the pyramid, and carried it with him back to Arizona. No sign of the pyramid was ever found again even though divers have reportedly searched, believing it was a remnant of the legendary lost Continent of Atlantis.

The story has excited Atlantis theorists around the world, and many papers have been filed about strange energies found in the crystal. But stories say Brown only showed his crystal a few times and photos of it appear non-existent.

In fact, a search for Dr. Brown has failed to turn up proof that he ever existed. The name is so common that Raymond Browns, and even Raymond Browns with doctor’s degrees, quickly turn up everywhere. There are two Raymond Browns currently living in Mesa, and we imagine they have been hounded by writers and researchers trying to get to the bottom of the Brown-crystal story.

Although the story has all of the earmarks of a grand hoax, it is amazing what some writers are saying about the mystical properties found in a baseball-shaped crystal that isn’t there.

It has been said that when staring into the crystal from a certain side, three pyramids can be seen. Then when looking at the pyramids from another angle, the images “dissolve into thousands of tiny fracture lines.

Other people claim to have seen and even photographed a large single human eye staring back at them from within the crystal ball.

And it is said that a compass needle placed next to the crystal will spin counterclockwise, then begin turning the other way when moved about two inches away. Metals are temporarily magnetized when in contact with it.

Stories are told about people becoming healed when touching the sphere.

The problem with all of these reports is that none of them are documented, the sources are anonymous and the sphere appears to be non-existent. It all makes for great contemporary mythology without foundation.