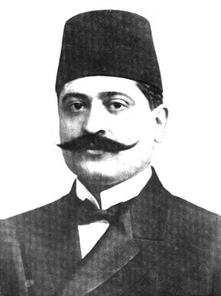 When we use the word genocide we tend to think of the Nazi slaughter of the Jews during World War II. But there was another contemporary genocide that may have been even worse . . . this one involving the Armenian people during the reign of Talaat Pasha, the Grand Vizier of the Sultan in the Ottoman Empire, from 1917 to 1918.

Because it was the time of the First World War and Turkey entered the war on the side of Germany, Pasha’s rule was known as a military dictatorship. He was one of a triumvirate known as the Three Pashas that ruled the Ottoman Empire during that ugly war.

While serving as the Interior Minister in April, 1915, Talaat, a Moslim, ordered the arrest and deportation of Armenian intellectuals in Constantinople. He also ordered a Temporary Deportation Law that spring that initiated what became the Armenian Genocide. He is considered the main perpetrator of the mass killing of two million Armenians, Greeks and Assyrians during his brief time in power.

The killings were considered an act of war against the "infidels" who were thought of as enemies of Islam.

While camouflaged in the legalese of government, Talaat’s orders can be interpreted as an order to wipe out the Armenian race. He may have come closer to achieving his goal than Hitler did in his quest to destroy the Jewish race a decade later.

Talaat may have set the standard for the Nazi holocaust in the way he and his soldiers went about destroying the Armenian people. Apparently Greeks and Assyrians also were targeted by the campaign because of their Christian faith.

While the soldiers were doing their dirty work, Young Turks created their own "killing squads" and "butcher battalions" and began what was known as "the liquidation of the Christian elements." The killing squads sought out non-Moslims and murdered them in extreme ways. It was said the Turkish countryside became littered with corpses.

At the same time, government squads were kidnapping children and converting them to Islam, then giving them to Turkish families. They also raped women and forced them to join Turkish harems or work as slaves. The Muslim people seized the property of deported Armenians and moved into their homes.

The Turkish government is now considered an ally to the United States, so the horrors of what occurred there have been carefully covered. The Turks have been unwilling to call what happened genocide. But information about the events that occurred have been leaked and the stories are gruesome.

People were forced into concentration camps. In the long marches to the camps, many people were forced to march naked. They were overloaded with supplies and forced to hike for miles without food and water. Those who collapsed along the way were killed on the spot. In the camps people were whipped, tortured, robbed, raped and killed. Men were forced to rape family members. Prison guards cut off the sexual organs of victims before killing them. They used bayonets, clubs, axes, hammers, spades, scythes and saws as their tools of murder. Thousands were burned, drowned, poisoned, dismembered, crucified, boiled alive and just beaten to death.

When the war ended, the Ottomans surrendered in 1918. The Three Pashas and leaders of the Young Turks fled to Germany, which promised not to prosecute them for their war crimes. A group of surviving Armenian nationalists, however, working in what was known as Operation Nemesis, tracked down and assassinated the leaders.
​
Talaat was assassinated in 1921 in Germany by Soghomon Tehlirian, a member of the assassination squad. A German court found Tehlirian not guilty of murder by reason of insanity caused by the persecution suffered during the war.