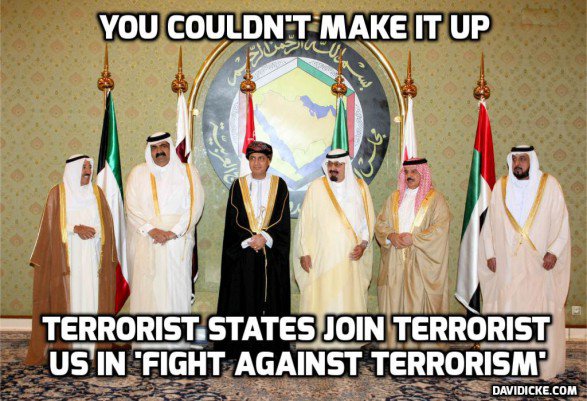 As the U.S. military gets more involved in the affairs of Iraq and Syria, and the media devotes more space than usual to the deadly March 22 Brussels bombings, conspiracy theorists are ablaze on the Internet with theories that the Islamic State terrorists are a false flag trick possibly created by the CIA.

The purpose of doing it would be to extend the so-called “War on Terror” and assure that the Pentagon’s Industrial military complex will remain heavily financed, even if 2016 elections steer the nation into a more non-military posture.

Let’s face it. War is just big business. And the war engine operating in the United States is essentially the largest and most profitable venture the nation has going for it these days. If Bernie Sanders’ presidential campaign continues on the track it has been taking, and even if political interests manage to successfully keep Sanders out of the White House, he has launched a movement in America that appears destined to change the nation’s way of doing business for years to come.

The crux of the Sanders message is to reduce military spending, bring back the tax once levied against big corporations and the wealthy, and use this money to pay down the national debt, tackle climate change, repair the nation’s crumbling infrastructure, improve our health care system so it benefits everyone, and make college free and available for all who qualify.

The Sanders proposals sound too good to be true. But if we stop pouring trillions of dollars into a defunct war machine, it could all be possible. A nation at war, however, can’t accomplish these things.

So why is the United States still heavily engaged in wars in the Middle East? And is there a way out of this mired mess?

Various writers and websites have been questioning this nation’s involvement in the current Iraq and Syrian civil wars and why a terrorist group like the Islamic State (ISIS) suddenly popped-up after our old nemesis, al-Qaeda, appears to have faded away. Reports appearing in Global Research support the conspiracy theorists.

The editor of Global Research, Michael Chossudovsky, is an award-winning author, a professor of economics at the University of Ottawa, and founder and director of the Center for Research on Globalization in Montreal. He and a team of well-known and trusted writers and researchers are strongly supporting the conspiracy theorists in a series of articles that are well worth reading.

Looking at the Middle East from an objective Canadian perspective, Chossudovsky says he has documented evidence that “Washington is behind the creation of the Islamic State (ISIS)." He writes that the Pentagon also is supporting the moderate Al Qaeda terrorists as part of America’s campaign against the Islamic State (ISIS). And they expect us to believe that they are committed to waging a campaign against the terrorists."

He also claims that the Islamic State is the new name for al Queda in Iraq. In other words, al Qaeda didn't go away, it just changed its name.

The reason the wars in Syria and Iraq have appeared so confusing to us is because everything has been carefully designed to keep us guessing. And the corporate US media has done a good job of keeping it this way.

According to Global Research, the United States and Israel, and with the help of NATO, are financing al Qaeda fighters to be at war with themselves.

We will try to clarify this:

Chossudovsky wrote that the US anti-terrorist campaign involves supporting a “moderate al Qaeda entity” known as Al Nusra in a battle against another al Qaeda entity called the Islamic State. In other words, “Al Qaeda is going after Al Qaeda, (which now operates under the name ISIS,) and both wings of al Qaeda are supported covertly by US intelligence.”

He says the US, NATO and Israel are state sponsors of this game of terrorism. They are providing the training, weapons and money to keep it going. “The endgame is regime change in Syria and the fragmentation of Iraq.”

Chossudovsky explains that “going after ‘Islamic terrorists,’ and carrying out a worldwide preemptive war to ‘Protect the American Homeland’ are used to justify a military agenda. The Islamic State of Iraq and the Levant (ISIL) is a creation of US intelligence. The incursion of the Islamic State brigades into Iraq starting in June 2014 was part of a carefully planned military-intelligence operation supported covertly by the US, NATO and Israel,” he wrote.

So what was Russia doing when it was sending bombing raids into Syria and Iraq? According to a Global Research report, Russia was indirectly fighting the United States by supporting the Syrian and Iraqi governments in their real fight against ISIS. Many of the bombing raids were aimed at oil tank trucks that were siphoning Iraq crude oil for sale on the world oil market. The money was being used to help finance the ISIS military.

Chossudovsky claims that he drew much of his information from a Defense Intelligence Agency document, leaked Pentagon documents and the release of Hillary Clinton’s controversial email archive from when she served as US Secretary of State.

Just as U.S. conspiracy buffs have been saying all along; it was all a big lie!

It appears that the Obama Administration has jumped right into bed with the former Bush Administration (and the shadow government behind the curtain) in perpetrating this wicked warfare. Even after Mr. Bush and Mr. Cheney left Washington, the U.S. military bombings and military assaults on Iraq and Afghanistan, and now Syria, have continued non-stop.

Millions of innocent people in those countries continue to suffer, perish, lose their homes and become destitute. And it is all being done for the profits of a big military industrial complex that appears to be running our nation. It has become an out-of-control oligarchy.

This also means that the big media brew-ha-ha over the goofs seeking the nominations for the presidency is just a circus production designed to entertain the public and get our minds off the real story.

The only candidate that might be out to change things is Mr. Sanders, who is running a campaign apparently financed by grass roots donations. He does not appear to be sold out to big business at this time. If elected, however, he is going to need a repaired House and Senate to back up his agenda.