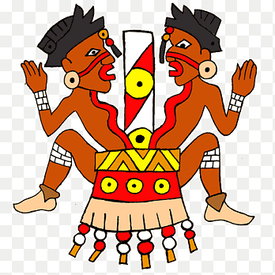 The Significance of Twins in World Mythology

A Hopi legend tells of brothers who become separated in the distant past. The younger brother goes west to establish a home for the Hopi people. The older brother travels to the east. He promises to wait there, listening for a call from his younger brother at the sign of trouble.

As cataclysmic events occur, the Hopi legend says the long-lost white brother is expected to return with important information to save the people. To make sure the tribe recognizes him as the real brother, or "Pahana." The brothers break a sacred clay tablet in two parts. The white brother promises to produce his portion of the tablet when he returns. This was to be a sign of his authenticity.

The Hopi legend is part of a worldwide myth linking brothers. The stories frequently involve twins. Among the most famous of the stories:

--Greek mythology tells of the Gemini Twins, Castor and Pollux, sons of the god Zeus and the mortal woman Leda. When Castor died Pollux pleaded with the gods for the brothers to be reunited. They were placed in the sky together. The cluster of stars known as Gemini now is among the constellations of the Zodiac.

--Another ancient myth among the American Indians is the story of Yama and Manu, twin children of a surrogate wife of the sun god. These children become the ancestors of the human race.

--The ancient Romans shared a story of their origins. They believed Rome was founded by Romulus, who was the twin of Remus. The men were supposed to be sons of Mars, the god of war.

Such stories can be found in nearly every ancient culture. They are nearly as common as stories of a world flood, and a belief in a divinity. The significance of the twins in these stories is an important clue as to our origins. It also may be a reminder that we gave ourselves about what we were supposed to become.

Contemporary author, philosopher and mystic Alstair Crowley, in his disturbing work titled Liber Al vel Legis, or better known as The Book of the Law, claimed the brief, three-chapter booklet was dictated to him in 1904 by a spiritual form identified as Aiwass (prounounced "I was"). The book, which is still available through Ordo Templi Orientis (O.T.O.), a secret society founded by Crowley, always includes an attached copy of the handwritten version, because its author claimed each dot and scribble on the pages contained important "magick" qualities and secret information.

This book, which is an important part of my families' library, has been studied and examined perhaps more than our Bibles. It was discovered that by holding one of the handwritten pages in the last chapter up to a mirror, the message "Veiled Twins Revealed" stands out clearly. The chapter appears to deal with the apocalypse and the rise of Horus, the Egyptian god of the new age.

The Book of the Revelation, which also describes a looming apocalypse, or judgment of mankind, tells of a "beast" that seems to be two people and yet functions as one individual. In Chapter 13, he is both the beast of the sea and the beast of the earth. The word twin is never used in describing the beast, yet it is strongly implied.

So what does all this mean and what is its significance to humans living in a contemporary age?

While we contain the physical elements of animals, humans are unique in that we have a very large brain that is divided into two distinct parts, or hemispheres. It is believed by some researchers that most humans go through their life only using a small fraction of their left brain. They believe that few of us ever learn how to turn on and use the right part of our brain. Some brain specialists have found, in experimenting with treatment for epilepsy and other brain/nerve disorders, that the right half of the brain can be surgically removed without causing loss of basic memory or motor functions in patients. Some of these so-called "experts" actually believe the right hemisphere of our brain is an extra, unnecessary appendage left over from evolutionary development.

The late Robert Monroe, founder of the Monroe Institute in Faber, Virginia, brought together a team of brilliant scientists who believed otherwise. They discovered a way of using sound frequencies, received through stereophonic headphones directed to the right and left ears, to wake up the right brain and get it working in harmony with the left brain. The technique, which is still taught at the institute today, is called "Hemi-Sync," short for hemispheric synchronization.

Students at Monroe Institute learn how to not only wake up the right brain, but to keep it working for the rest of their lives. They also learn valuable techniques of putting their minds into various levels of consciousness. While in these mental states, the students learn how to absorb new information, heal the body, remote view, go into states of total relaxation and rest, and even, for some, leave the body. Advanced students even experience what it is like to die. They visit the spiritual world, claim to talk to the dead, and then return.

Robert Monroe was a pioneer, breaking important new ground for humans who may survive the events lying ahead of us. If there are survivors in the future world, and I want to believe there will be, they will still have a chance to obtain the advanced state of consciousness that all humans were supposed to have achieved.

My point is that the stories about the "twins," Crowley's secret message "veiled twins revealed," and the two beasts in the Book of the Revelation, are all references to the uniting of the two halves of our brain. Once we accomplish this, we will have the ability to reach advanced states of consciousness. We then achieve what is described as a forbidden act in the Book of Genesis; we become like God.

What happens when we achieve the ability to use both sides of our entire brain? We can connect with the collective, which is the true and all-knowing mind of God. Each of us, who possess souls, possess a fraction of the great light that is God. Thus, in a sense, we are all a part of the whole. This is what is meant when it is said we are all One.

When our brains are functioning the way it was intended, we no longer need to speak aloud. We, like the animals who share this planet, can communicate telepathically. In the future we will be able to leave our bodies at will and visit the spirit world around us, meeting the entities that exist in that world, and travel with mere thought to any place in the universe we wish to go.

As humans we possess the capability of great power. We can both create and destroy, merely by thought. This may be the reason that certain forces went to great lengths after we began our great experiment on this dark planet, to prevent us from discovering our potential. We were all given the myth of an external god that we must pray to and fear. We were never allowed to know that the god we feared always existed within ourselves.